Coyotes can be found from the steamy wetlands of Florida to the icy tundra of Alaska. Not only do coyotes inhabit the wilderness of the continental United States, but they also inhabit urbacn areas and major cities like Los Angeles. Known for their adaptability, coyotes are opportunistic omnivores who prey mainly on small mammals. 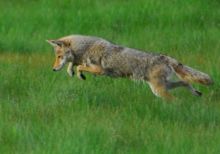 Coyotes (Canis latrans) have been a growing concern in the Southeastern United States since the early 1980’s when they began migrating over from the West. An adaptive species that Darwin would be proud of, this small canine filled a gap in the food chain that was easily occupied in the absence of other large predators. By 1973, both of North Carolina’s top predators, the Red Wolf (Canis rufus) and the Eastern Cougar (Puma concolor couguar), were listed as Endangered under the Endangered Species Act. Currently, both species are considered extinct, except where experimental populations of red wolves live. Without competition, coyotes have free-reign of habitat and prey items.

Have You Seen Me?   YOU can help us to estimate the probability of human-coyote interactions in Buncombe County, NC!       Coyotes, while not native to the…

The summer of 2012 brought us four talented and enthusiastic students who helped us expand our efforts across the South to protect wildlife and imperiled habitats while educating people and strengtheing our relationships with scientists and land managers.