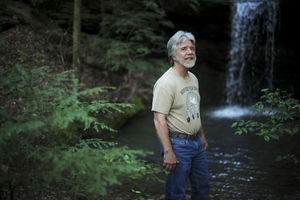 Jeronimo Nisa/Decatur Daily Dr. Charles Borden enjoys a little-known spot in the Warrior Mountains of Bankhead National Forest. Borden is the seventh generation of his family to live in Bankhead’s Brushy Lake region.

Sodden leaves muffled Charles Borden’s steps as he nimbly crossed the land, ducking under fallen limbs and weaving a path between century-old oak and walnut trees. He paused briefly to point out a single yellow wildflower beneath the canopy of leaves.

A child of Bankhead National Forest, Borden knows the land so intimately he rarely follows the established trails. Instead, he relies on his connection to the forest, a connection that dates back thousands of years to when his Cherokee ancestors traversed these woods and streams, to guide him.

“I have a special attachment to this land. It overwhelms me that I can look at the same waterfalls some of my ancestors looked at 12,000 years ago,” said Borden, 67. “On Earth Day, we need to remind ourselves that the Earth is a finite resource. Our faith has to lie in the goodwill and sense of humanity to protect this land and all its living species. Our great challenge is learning how to live in harmony with nature.”

“Generally, I’m an eternal optimist, but I am afraid what the future holds. The growth in population and technology has given humanity the ability to cause greater destruction, but it has not given us the wisdom or humility critical to protecting the Earth. Humans mistakenly believe we are the center of the Earth. In reality, we are relative newcomers here,” Borden said.

Borden’s education into the “wanderlust” of the Sipsey Wilderness, a 24,922-acre section of Bankhead, which he said rivals the fine art collections at the Louvre in Paris, the Metropolitan Museum of Art in New York and the Tate Modern in London, began six decades ago. The seventh generation of his family to live in Bankhead’s Brushy Lake region, Borden grew up exploring the forest with his father.

“It takes more than a lifetime to see all of Bankhead, and I’ve been having fun trying to do it. You can hike the same trail in winter and spring and get a completely different perspective,” Borden said. “I’m constantly amazed at the complexity of the beauty around us.”

After briefly leaving the forest to attend Birmingham Southern College and earn a degree in dentistry, a profession he chose because it allowed him the opportunity to live in Bankhead while also contributing to society, Borden returned to Lawrence County and joined the conservation movement.
He successfully lobbied U.S. senators and representatives for the expansion of the Sipsey Wilderness; worked alongside Mary Burks, founder of the Alabama Conservancy, the state’s first independent environmental organization; and served on the board of directors for the Bankhead Monitor, a wilderness protection nonprofit now known as Wild South.

Tasked with protecting public lands and defending wildlife, Wild South holds guided hikes to introduce people to the outdoors. Outreach Coordinator Janice Barrett, who oversees the hikes past waterfalls, sandstone bluffs and hemlock forests, designed a Wild Wednesday program specifically for children.
“Being out in nature is the first step in learning to love it, and when you love something you will work to protect it,” Barrett said.

During the Wild Wednesday hikes, Barrett encourages children to turn over rocks, climb over boulders and search for “critters” in the streams. Last year, one of those children was Roc Carey, a third-grader at Moulton Elementary School.

“I love nature. I love the soothing sounds of nature. I love listening to the birds and the waterfalls. My favorite hike is the Low Pressure Bridge hike because we get to go swimming at the end,” said Roc Carey, who, for his ninth birthday in February requested donations to Wild South and the National Wildlife Federation.

Instilling a love for nature through exposure and education is key in helping children develop a responsibility for the environment, Barrett and Borden said.

“Take children hiking. Let them get out in the woods. Let them tumble, stumble and get in the mud. Let them stand under a waterfall and drench themselves. That is how they will develop a respect for nature,” Borden said.

As dusk gave way to night and the swallows silenced, Borden stood beneath the stars, bright against the cloudless sky and identified Orion’s Belt, the Big Dipper, the Little Dipper, Polaris and Sirius.

“It is important that we as humans understand how small we are compared to the universe for that gives us the humility we need to truly respect nature. It is our great responsibility to pass on that respect to the next generation. If we don’t do that, then we have failed society and humanity. It took millions of years for all of this to come be. Once it is destroyed, it is lost forever,” Borden said.

To help protect the land, Borden encouraged people to minimize their garbage, educate themselves on the issues of global warming, attend public forums and ask politicians about their stances on environmental legislation, clean drinking water and the establishment of more public land.

Posted in Get Outside, Press Releases, Protecting Public Lands