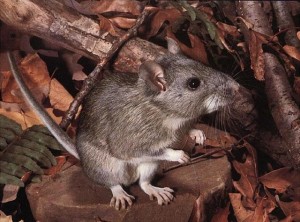 When people think of rodents they often imagine animals that are very prolific–often a nuisance around the farm or house. In truth, there are literally dozens of species of rodents across the Southeast that are quite rare and important ecologically. One such animal is the Allegheny woodrat (Neotoma magister).

As is the case with many species that are rare across a wide geographic range, populations of the Allegheny woodrat are limited by the presence of suitable habitat. Allegheny woodrats prefer rock outcrops, caves, boulder fields, and rocky talus slopes, as they depend on the forests that surround these areas for food. These woodrats seek shelter in rock crevices and maintain extensive den sites that are constructed out of sticks, twigs, grass, and other vegetation. These nests, common to many species of woodrats, earned them the common name “pack rats”. 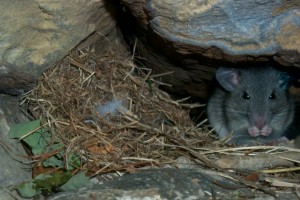 While woodrats resemble ordinary house rats they are easily distinguished by their lack of a naked, scaly tail. Instead, woodrats bodies and tails are covered with soft fine fur. They are adapted for life among the rocks with long “whiskers” used to navigate in narrow dark passages. The Allegheny woodrat is nocturnal and active year-round. They venture away from their protective shelters at night to feed on and gather nuts, berries, fungi, and vegetation which they sometimes caches in their dens.

Woodrats typically have two pups per litter and females may have up to four litters per year if food is abundant. Like many small mammals in the mountains the woodrat is prey for owls, weasels, bobcats, and large snakes. In fact, Timber rattlesnakes often inhabit the same rocky areas.

The Allegheny woodrat inhabits the Appalachian Mountains and its range extends from New York, west to Indiana and south to Northern Alabama across 12 states. The species has declined dramatically across its range and is thereby listed as a Federal Species of Concern.

There are several theories related to why the species has declined. The most likely reason is that with the loss of the American chestnut–a stable “mast” producer–an abundant food source was lost. Concurrently, wide-spread and destructive logging further diminished woodrat habitat. One reason the species has declined in Northeast relates to a parasite transmitted by raccoons which overpopulate the region. 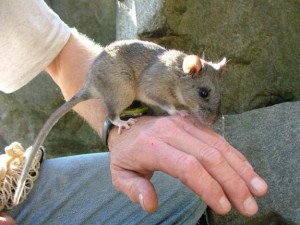 There is hope that with adequate protection of remaining habitat and efforts to protect forested “corridors” linking colonies together that the Allegheny woodrat will persist and perhaps recover to maintain stable populations. In order for this to occur, land managers and Wild South will need to continue to document the presence of woodrats and work to protect essential habitats.

On private lands the utmost care must be afforded when human developments encroach on woodrat habitat and it is best to avoid clearing or developing any rocky habitats. On our national forest, management must aim to protect core habitats and restore oak communities while biologist should continue to research these unique rodents.