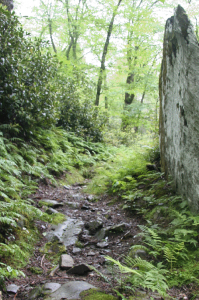 With guidance provided by the Tribal Heritage Preservation Office of the Eastern Band of Cherokee Indians, the nonprofit organization Wild South and its partners have mapped more than 1,000 miles of Cherokee trails that existed prior to the mid-1800s in eastern Tennessee, western North Carolina, South Carolina and Georgia. (Photo: Lamar Marshall)

American Indian trails once wove throughout the North American landscape, following the contours of the land to connect communities and provide trade routes across the continent. While remnants of these ancient trails still exist throughout the Southeast, a cultural amnesia of sorts has taken place within today’s culture and landscape, a forgetting of the past because of modern development and life.

However, this historical trail network is being identified throughout the Southeast with a comprehensive mapping project known as the Trails of the Middle, Valley and Out Town Cherokee Settlements. With guidance provided by the Tribal Heritage Preservation Office of the Eastern Band of Cherokee Indians, the nonprofit organization Wild South and its partners have mapped more than 1,000 miles of Cherokee trails that existed prior to the mid-1800s in eastern Tennessee, western North Carolina, South Carolina and Georgia.

“Before the era of blasting away mountains and arbitrarily laying interstates from points A to B, people followed the natural-flowing geography of the land through valley corridors, mountain gaps and shallow fords,” said Lamar Marshall, cultural heritage director at Wild South, an Asheville-based nonprofit that works to protect the wild character and natural legacy of the South. “Therefore, Indian trails represent the original America, long before the era of strip malls and lifeless ribbons of asphalt.”

Fifteen major trails in western North Carolina and 75 peripheral trails throughout the Southeast have been retraced through the use of rare archives, early land records and surveys, extensive field surveys, photographed geographical sites, and filmed oral histories and traditions. Trails have been mapped across the Nantahala, Cowee, Snowbird, Blue Ridge and Great Smoky Mountains, and about 148 miles of trails and corridors have been mapped within the Pisgah, Nantahala and Cherokee National Forests.

Researchers have discovered that many ancient trails have survived as unpaved U.S. Forest Service roads, modern paved roads and even major highways, providing clear evidence that the main arteries of today’s 20th-century road system in the Southeast were built directly on Cherokee trails and corridors.

“This project is only a beginning point for the recovery and recognition of one dimension of lost Cherokee geography, that which pertains to travel and the landscape,” Marshall said.

In 2012, Wild South was awarded a developer grant from Google Earth Outreach to create an online interactive Google Earth Map of Cherokee trails in the Southeast, which is expected to launch in April 2013. 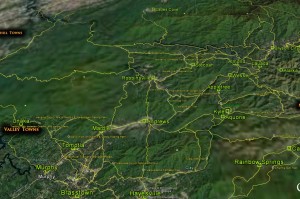 Wild South was awarded a developer grant from Google Earth Outreach to create an online interactive Google Earth Map of Cherokee trails in the Southeast, which is expected to launch in April 2013. (Image: Wild South)

Users will be able to simulate a flyover of the landscape with Cherokee trails identified on the Google Earth map. The project will also allow users to zoom in on trails, which will be hyperlinked to photographs and video clips of trail segments, audio clips of oral histories as told by Cherokee elders and digital images of original historical documents.

Sensitive information, such as the location of former homes or sacred sites along the byways, will not be available to the public.

For Marshall, who has an extensive background in surveying, mapping and engineering and a keen skill for deciphering old letters and survey records, this project has been a journey of geographical time travel. At one point during the project, he recalls riding a horse at dusk with three Cherokee companions along an ancient trail within the Great Smoky Mountains: “I had a distinct feeling in that moment that we could have been in the year 1700 and that we would soon smell the smoke of a hundred fires from a Cherokee village in the valley below. Along these trails are the blood, sweat and tears of those who lived, laughed and died here.”

Project organizers hope the restoration of ancient trails—which they call “the historical arteries of the land”—will help reconnect today’s generation to the region’s natural and cultural landscape by encouraging people to get outside and explore these historical areas. 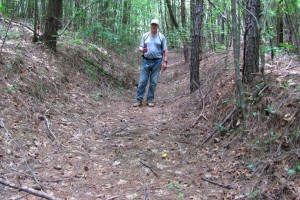 “By walking these ancient trails, we are traveling through corridors of time,” Marshall said. “Today, people can stand in the deeply worn recesses of these travel ways and look at the surrounding mountains with the assurance that they are seeing, from exactly the same viewpoint, the shapes, colors, ridge tops, balds and wooded slopes that were seen by the Cherokee a thousand years ago.”

Jenni Frankenberg Veal is a freelance writer and naturalist living on Walden’s Ridge. She enjoys writing about the natural world and exploration opportunities found within the southeastern United States, one of the most biologically and recreationally rich regions on Earth. Visit her blog atwww.YourOutdoorFamily.com.