In his Travels, William Bartram describes what I consider to be the three most elusive episodes in his journey from South Carolina to Cowee Town in 1775.

These accounts include meeting the Cherokee strawberry-picking maidens, whom I am convinced he encountered on Green’s Creek just east of Cowee Bald. The second mystery is his traverse across the Nantahala Mountains, where he met Cherokee Chief Attakullakulla. The curious fact that Bartram did not pass through any of the Valley Towns after travelling for so long and so far makes it difficult, if not impossible, to map this section of his route after he ascended Nantahala Mountain at Burningtown Gap near Cowee Town.

The third of these most elusive and contended geographical mysteries is that of Bartram’s Mount Magnolia and Falling Creek. I am certain Pinnacle Knob and Martin Creek near Clayton, Georgia cannot correlate with his actual route. Let’s examine some facts concerning Bartram’s travel from Oconee Mountain in South Carolina to Mount Magnolia. 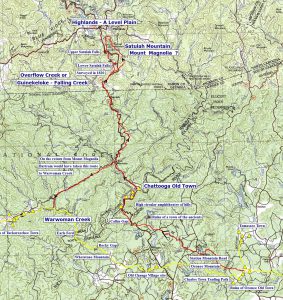 The route from Oconee Moutain to the Highlands.

After leaving Seneca Town, modern Clemson, SC, Bartram traveled north to Fort Prince George, which at this time was used as a trading house. He spent two or three days there waiting for an Indian guide that didn’t show up. Alone, but evidently armed with much information from the traders who were familiar with the Cherokee country. He left Fort Prince George, forded the Keowee River at the site of Keowee Town and followed the trading path to the site of Oconee Old Town and Oconee Mountain. Bartram was following a well-documented and popular road known as the Charles Town Trading Path or the Cherokee Path. From Oconee Mountain this path crossed Whetstone Mountain at Rocky Gap and forded the Chattooga River at Earls Ford. From the ford, it followed Warwoman Creek west towards Clayton, Georgia. This route was followed by the British Army in 1761 shown in great detail on a map made from the expedition. It also is detailed in many journals including those of 1796-97 Benjamin Hawkins and the 1776 Andrew Williamson expedition. Those who have attempted to reconcile Bartram’s geographical route from Oconee Mountain to Earls Ford and Warwoman Creek on the Charles Town Trading Path have exercised great “geographical liberty” as his account does not support that theory.

It is much more feasible that Bartram left the Charles Town Trading Path near Oconee Station and took the right fork along Station Road, an old Cherokee trail, along the crest of the mountain where he explored the highest point, then descended the mountain on a main trail that led to Chattooga Old Town at modern-day Russell Field, at the conjunction of the Chattooga River and the West Fork of the Chattooga. Bartram described the ruins of an old town on the Chattooga River. Chattooga Old Town is the only historic Cherokee town found on the river in this area. Bartram also described several miles of flat bottoms near this town, and the Earls Ford area is rugged with no bottoms or town sites. The route Bartram followed was a path that connected Oconee Old Town with Chattooga Old Town; both of these towns were destroyed by Creek Indians in the 1750’s.

The modern description of the route from Oconee Mountain would be across Oconee State Park between the two lakes; thence across East Village Creek; near Bethlehem Church; across Taylor Creek south of Chattooga Lake; up to Callas Gap of Chattooga Ridge and down to the Chattooga River downstream from Russell Bridge and Field.

So, where did he go? To solve this mystery, or to at least narrow down the potential possibilities, we find in the 1820 Survey of Rabun County, Georgia, that the West Fork of the Chattooga (near the present-day state line between South Carolina and Georgia) was known as Guinekeloke Creek, a Cherokee word that is from e-gwo-ni (river or stream) and ga-lo-s-gv (falling) or Falling Creek. The Anglo corruption of the name became Overflow Creek, or Flowing Over Creek. This is indeed a good name, as there are about eighteen named waterfalls and cascades within five miles north of Chattooga Old Town. Clear Creek Fork (called Silver Run Creek in 1820) of Overflow originates at Satulah Mountain in Highlands. Upper Satulah Falls is located at the base of Satulah Mountain and is a cascade of 100 feet. Less than a mile below the upper falls is Lower Satulah Falls, or Clear Creek Falls, also 100 feet high. Between the two falls, there is an 850-foot drop in elevation.

Did Bartram visit Satulah Mountain? It is very likely that he did. He would have followed the Cherokee trail, the corridor of modern North Carolina Highway 28, from the ruins of Chattooga Old Town up to the Clear Creek fork of Overflow and ascended Satulah Mountain, which he dubbed Mount Magnolia. Leaving the main trail at Wilson Gap, he could easily follow the slope of Satulah to the summit. He described grassy ridges and a beautiful forest. “When I began to ascend again, first over swelling turfy ridges, varied with groves of stately forest trees, then ascending again more steep, grassy hill sides, rested on the top of mount Magnolia, which appeared to me to be the highest ridge of the Cherokee mountains….This exalted peak I named Mount Magnolia.” 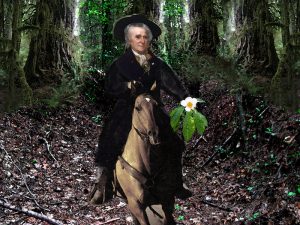 In 1941, Judge Felix Alley published a book called Random Thoughts and the Musings of a Mountaineer. He was the son of pioneer settlers, born in 1873 in Whiteside Cove near Highlands, North Carolina. His father was Col. John H. Alley and his mother, Sarah W. Norton, was the first white child born in Whiteside Cove. Judge Alley grew up among the earliest settlers of the Highlands area, who told him about the Cherokees, the buffalo and the glades and grasses that grew in the open woods of the escarpment. He wrote: “All through the mountains the soil of the coves and valleys was exceedingly fertile, the climate was mild for eight months in the year, and the range was free, and the livestock of every man grazed undisturbed on his neighbor’s land; and cove and valley, hill top and mountain side was one unbroken pasture of luxuriant wild grasses which grew high enough to be mown for hay…Down in the southeast corner of Macon County, near my native home, there is a low, swampy place known as ‘The Glades,’ and in that swamp there is a place which from the early days up to now has been known as ‘Buffalo Wallow.’ The old hunters said that the herds of buffalo were in the habit of coming to this place in hot weather to wallow in the mud.”

Bartram ascended up the mountain from the south side and went down on another side. To his right, he described a level plain. There are very few level plains on crests of the Appalachian Mountains. The Highlands Plateau is a very unique geographical area. “I perceived at some distance before me, on my right hand,” Bartram later wrote, “a level plain supporting a grand high forest and groves.” Highlands is noted for its “primeval forest.” The last remnants of this forest are protected today.

After this, he rounded the west base of Satulah and discovered Falling Creek. The Cherokee trail from modern Highlands follows close by Upper Satulah Falls or Cascades and the over 850-foot long ravine down to Lower Satulah Falls. Bartram descended the Blue Ridge and intercepted Warwoman Creek, where he continued on his way to Stickoa Old Town.

But, how did Bartram know the English interpretation of the Cherokee name for Falling Creek? Obviously he was told by any number of persons he met before and after he began his journey. Bartram was acquainted with the geography of these Cherokee trails and towns from his counsel with British Indian Supervisor John Stuart, and traders George Galphin, Alexander Cameron, and others. He likely had maps, including a copy of the 1764 John Stuart map. The Stuart map shows a path from Tomossee Town that ascends the Blue Ridge escarpment and passes through Highlands and terminates at Tassee Town near modern Franklin which was the Cherokee town of Nikwasi. Although the map does not show the route Bartram took, the modern corridor of Highway 28 was a main trail from Chattooga Old Town that intersected the Tomassee to Tasse trade route. Although traveling alone in his journey to Cowee, at some point in time, he states in William Bartram on Southeast Indians, page 153, “When I was passing through the Cherokee country, WE came to and crossed a very fine rivulet, a branch of the Tugilo which is called Warwoman’s Crick. I inquired of my companion, an ancient Trader, the cause of so singular a name…”

There remains the possibility that Bartram left the Chattooga Old Town ruins and made his way up to some other mountain peak on the Blue Ridge above Overflow Creek, but none seems to fit his description as closely as that of Satulah Mountain. And I, like all historians, reserve the right to change my mind when new material arises from the dusty archives of time.