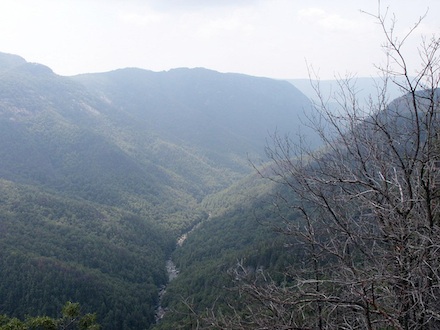 A proposal to burn 16,586 acres of the Linville Gorge has the support of several environmental groups, but a number of citizens have organized to oppose the plan.

Under the plan, announced in a May 18 scoping letter, the U.S. Forest Service will use prescribed fire in the Linville Gorge Wilderness to restore the natural fire regime; manage unnatural buildups of leaf litter, shrubs and other wildfire fuels; and restore fire-dependent ecosystems and woodlands.

The public has until Jan. 15, 2013, to submit comments on the plan by email to comments-southern-north-carolina@fs.fed.us or by mail to USDA Forest Service, National Forests in North Carolina, ATTN: Heather Luczak, 160-A Zillicoa St., Asheville, NC 28801.

“Public feedback will be used to help develop alternatives that will be analyzed in the environmental assessment and considered by the decision maker,” a June 2012 briefing paper on the project stated. “Implementation of the prescribed burns could be a couple years away.”

The area to be burned includes 11,786 acres in the Linville Gorge Wilderness — a designated wilderness area under the 1964 Wilderness Act — and 4,800 acres of National Forest land adjacent to the wilderness.

Burns would occur in four or more separate areas at different times and be repeated every five to 10 years, the Forest Service stated.

“Prior to the 20th century, many parts of the Linville Gorge likely burned every five to 10 years from lightning-caused fires,” the scoping letter said. “Decades of fire suppression have altered the historic fire regime and resulted in a decline in native fire-adapted and fire-dependent communities, including pine-oak woodlands, oak forest communities and two federally listed plant species.”

But opponents of the plan question the effectiveness of controlled burns in removing fire load and undergrowth.

A website called “Save the Linville Gorge Wilderness” — at http://www.savelgw.org — points to the Forest Service’s burn of nearby Dobson Knob in March 2011. Displaying a photo from the knob said to be taken in August 2012, the website said much of the burn area was full of scorched and dead trees and debris on the ground, “more fire ready than ever.”

In addition, the removal of canopy and ground cover that help hold moisture caused the area to be drier, the website said. A contributor to the website did not respond to a message seeking comment as of presstime.

Stevin Westcott, press officer for the U.S. Forest Service, said he had seen the photo on the “Save the Linville Gorge” website and believed it was taken in an area burned by wildfire, not prescribed fire.

In photos taken in June 2012 provided in the U.S. Forest Service briefing paper, trees in Dobson Knob appear unharmed while the forest floor appears clear of debris, other than large logs, seedlings and a thin layer of leaf litter.

A petition on the website change.org, signed by 92 people as of Tuesday, calls on citizens to comment on the proposal in an effort to “stop (the) U.S. Forest Service proposal to burn the Linville Gorge Wilderness.”

Prescribed fires do not always go as planned. Last month, Pilot Mountain State Park in Surry and Yadkin counties was subject to a 675-acre wildfire when an 180-acre prescribed burn jumped across containment lines into steep terrain. And in June, a controlled burn planned for 1,500 acres in Craven County’s Croatan National Forest escaped and burned more than 21,000 acres.

A few commenters on the petition site were skeptical of the forest service’s ability to maintain control of burns in the Linville Gorge, known for its rugged, steep terrain.

Westcott said the Forest Service has a plan in place to protect the residential community of Gingercake Acres, which is located close to Linville Gorge.

Opponents’ other argument against the Linville Gorge burn plan is that interfering with the forest belies the area’s designation as a wilderness and instead makes the gorge a “managed forest.”

But Josh Kelly of WNC Alliance that fire is a natural process that should return to the Linville Gorge Wilderness. “The biggest change to the wilderness in the past 50 years has been the control of lightning-ignited fires,” he said.

The U.S. Forest Service plans a prescribed burn of four sections of the Linville Gorge Wilderness
every five to 10 years.
More Info