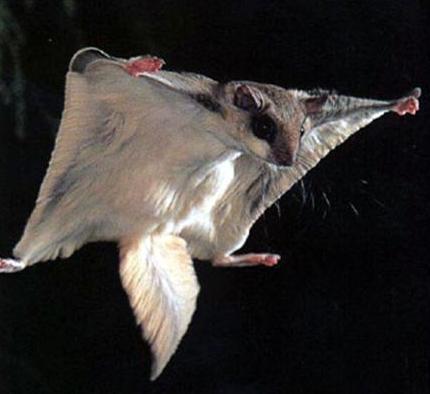 This squirrel has a brownish-red coat along its sides and back and a grayish-white under belly. Its most distinctive feature, however, is the lateral line that stretches from ankle to ankle highlighting the flap of skin which it uses to glide. The tail is also flatter than most squirrel tails since it’s used as a rudder-like steering aid in flight.

A relatively small section of the Appalachian mountain range makes up the extent of the Carolina Northern Flying Squirrel’s habitat. This is due to the fact that thousands of years ago glacial ice covered much of, what is now, northern United States. This left the higher elevations of the southern Appalachian mountain range the only viable habitat since it was free of ice. Today, this intriguing animal can still be found in the higher elevations of western North Carolina, eastern Tennessee, and southwest Virginia.

At these higher elevations, it prefers a habitat of mixed conifers and hardwoods. Research has shown the squirrels make their nests in the hardwoods but forage for food under conifers. Interestingly, during the cooler months of the year the squirrels use only finely shredded Yellow Birch bark to make their nests.

As its name suggest, the Carolina Northern Flying Squirrel has a unique means of transport. The flaps of skin along its side doesn’t allow it to fly but it can glide for great distances depending on the terrain and height of the tree from which it leaps. This is an effective means of escaping predators or simply making it down to the forest floor where they forage for fungi.

*** Due to the increased fragmentation and loss of forest habitat, the Carolina Northern Flying Squirrel was listed an endangered species in 1985. ***