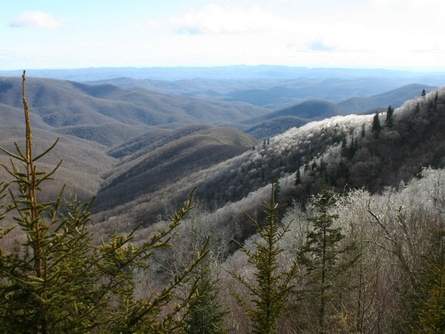 The U.S. Forest Service wants to spend about $660,000 to log roughly 450 acres in the Courthouse Creek drainage of Transylvania County, reconstruct 15 miles of old roads and thin another 330 acres with herbicides and hand tools to favor the growth of young oaks and hickories.

The agency says the project is necessary to create grassy or shrubby habitat for wildlife species such as the golden-winged warbler, protect water quality by repairing eroding roads and trails, and manipulate forest conditions to favor commercially valuable tree species.

After expenses, the project would produce about $24,000 from the sale of timber, the Forest Service estimates. But Ben Prater, associate executive director of the nonprofit WildSouth, said the agency’s fiscal analysis doesn’t factor in damage done to tourism from the impacts of logging.

WildSouth, the Western North Carolina Alliance and other conservation groups are pushing to alter the Courthouse project, claiming it overemphasizes timber production to the detriment of ecological, recreational and cultural interests. Some fishermen and hikers echo those concerns.

“Over the last five or 10 years, the Forest Service has become much better attuned to managing forests from an ecological perspective,” said Bob Gale, public lands director for the WNCA. “Surprising to me, this is more of an old-school timber sale, like they did in the ’80s. It’s weighted heavily toward commercial logging, with little regard for the wildlife, recreational and cultural values of the area.”

Case in point, said WNCA Biologist Josh Kelly, is the 172 acres of logging proposed within the Pisgah Ridge/Pilot Mountain Significant Natural Heritage Area, a steeply sloped, lush area of waterfalls and rare species identified by the N.C. Department of Environment and Natural Resources.

Instead of producing shrubby habitat in thousands of nearby acres designated for mixed-aged forestry, Kelly said the Forest Service chose to target 80- to 100-year-old woods that are home to sensitive species such as the pink-shell azalea, brown creeper and small-footed bat, which depend on older forests.

“They could get that timber elsewhere in the district, without going into what the state has identified as one of the most important areas of mature forest in North Carolina,” Kelly said.

Forest Service officials say the land and resource management plan they must follow by law “does not specifically recognize state inventory areas,” but that they considered rare species and habitats while planning the Courthouse Creek project.

While admitting some pink-shelled azaleas, a rare plant species, might be killed by logging or roadwork, Forest Service Botanist Dave Danley said in a report those losses would not impair the plant’s survival across its range. He added timbering might actually help the plant spread, a claim Kelly called “dubious.”

The blooming azaleas are what draw hikers each spring to the Art Loeb Trail that skirts the proposed project, said Ruth Hartzler of the Carolina Mountain Club. While not opposed to logging per se, Hartzler said the Courthouse project would mar vistas from the Mountains-to-Sea Trail and the Art Loeb.

“We have what you’d almost call a pilgrimage every May on the Art Loeb to see the pink-shelled azaleas,” she said. “The timber sale won’t necessarily damage all of the azaleas, but it will have an effect on the aesthetics of hiking the trail.”

A scenery analysis by USFS Forest Landscape Architect Erik Crews found “evidence of past timber management is visible from many locations in the form of logging roads and timber harvest areas,” but determined the Courthouse project would meet all of the agency’s “visual quality objectives.”

Forest Service officials have said sensitive areas of old-growth forest would not be logged, including the land closest to the Blue Ridge Parkway and Devil’s Courthouse.

The agency maintains that roadwork and logging won’t add much sediment to Courthouse Creek or other tributaries in the headwaters of the French Broad, but fishing guide Mac Marett isn’t convinced. He’s watched as the North Fork downstream of Courthouse has grown muddier in the last decade from multiple sources of erosion in the watershed.

“Courthouse has had so many problems, with the hurricanes blowing out (Forest Service Road 140) and all those clogged culverts up there just spewing silt into the stream,” he said. “Then we had several summers of really bad drought on top of that. This would be like adding insult to injury.”

The Forest Service says without the project, eroding trails and roads will continue to dump sediment into Courthouse Creek and its tributaries, suffocating aquatic life. But Kelly said replacing damaged or missing culverts for one timber sale isn’t going to solve water quality issues long-term.

“At this point, the damage has been done by those undersized culverts,” he said. “They didn’t maintain them then and they’re unlikely to do so in the future because they don’t have the resources to take care of roads they already have. But they keep adding new ones.”

Cherokee Indians used the Courthouse Creek drainage for centuries and several area landmarks are considered sacred by the tribe. Forest Service archaeologists discovered 83 new cultural sites while surveying for the project, 18 of which are eligible for the National Register of Historic Places.

While agency officials say harvest units were scaled back to avoid impacts to cultural sites, Prater worries logging and roadwork for the Courthouse project will open up easier access for looters and vandals.

“Anyone who has the wherewithal to explore and find places to loot or steal (artifacts) will have an easier time,” he said. “We’re not confident the Forest Service is going to be doing enough to protect the integrity of cultural sites.”