The Eastern Box Turtle (Terrapene carolina) is one of two species of box turtles found in the United States. It is the only “land turtle” found in North Carolina and is also the state reptile. 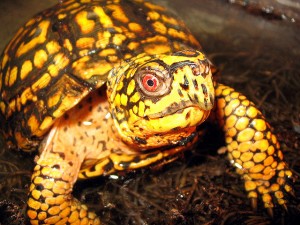 The Eastern Box Turtle is easily identified  by their bright markings. They have high, dome-shaped carapace (top part of shell) and a hinged plastron (bottom part of shell). They are usually dark brown or olive colored with bright orange or yellow patterns. The male will usually have red eyes where the female will have yellowish-brown eyes. They can grow up to eight inches long.

Eastern box turtles are omnivores, and will eat almost anything they can fit in their mouths. Generally they consume worms, insects, fruit/berries, mushrooms and carrion. As they mature their diet shifts from primarily meat/animals towards one that includes more plant material. 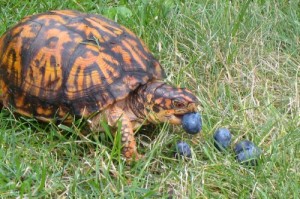 One may find an Eastern box turtle living in a wide variety of habitats from forested areas to dry grassy meadows to swamps and sand hills. Although they can live in a variety of habitats, they prefer moist forested areas with large amounts of underbrush. They do not travel far, usually living within an area less than 200 meters in diameter. They are the only fully terrestrial turtle encountered in North Carolina. They are active during the day (diurnal), particularly after rains. If it feels threatened, eastern box turtle can close itself completely within its shell.

Eastern box turtles mature slowly, reaching sexual maturity between 7 and 10 years of age. Once mature, a female box turtle will lay between 3 and 6 eggs each spring in a shallow nest which hatch in late summer or early fall. Hatchling box turtles measure only 1.25 inches (3 cm) in length. 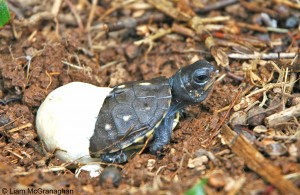 Eastern box turtles are declining over much of their range. They are very susceptible to habitat fragmentation, and road-related mortality. They also suffer from collection as pets. Because they take so long to mature, it is hard for box turtle populations to recover from these pressures. Box turtles also possess a homing instinct. If you find a box turtle on the road, do not take it home with you and release it. A box turtle released away from its home range will often wander until it dies. Rather – if it is safe – move the box turtle to the side of the road.