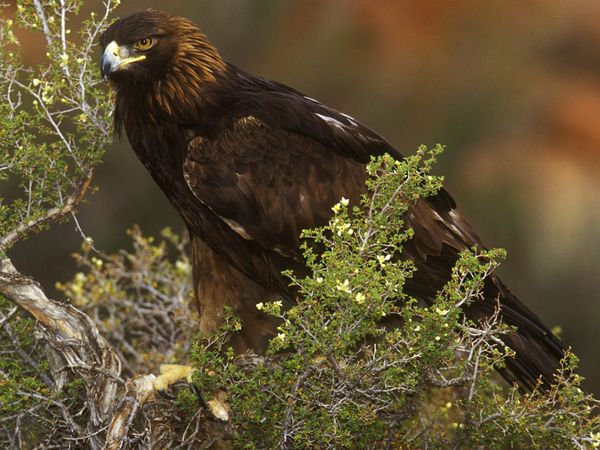 The Golden Eagle is the largest raptor in North America, measuring from around two and half to three feet with a wingspan of seven feet!

Golden Eagles are dark in color with a gold-yellow patch behind the neck and head- and they are ‘booted’, meaning they have feathers down to the toes. Like all raptors, the Golden Eagle has sharp talons and a strong curved beak for killing prey. These birds soar high above in the sky, looking for prey below and can dive at speeds up to 150 MPH!

These majestic raptors are Federally protected by the Bald and Golden Eagle Protection Act, but both species remain at risk by the threat of habitat loss, rancher interactions, poachers and pesticides. Because of its incredible size, hunting prowess and uniqueness, this is one of the most-studied species in their habitat ranges (See below*). Wild South works to protect public lands and many high-elevation Appalachian areas could provide excellent Golden Eagle habitat. With support of Deltec Homes, a partner that not only adheres to sustainable, low-impact practices, but also assists with wildlife habitat certification and site management, we are helping to protect habitat and make strides to protect native wildlife like the Golden Eagle.

Golden Eagles like to live in isolated mountainous regions and build huge nests on remote cliffs, atop trees or poles, and other tall structures and often pairs return to reuse nests. Interestingly, they are monogamous and some are migratory. Their habitats range from Mexico to Alaska and they are mainly found in the Western US, but reported sightings have been recorded for over a century in the East, especially North Carolina.

Now, you have to read this…drum roll…

**According to Christine Kelly of NC Wildlife Resources Commission:

“Last winter, North Carolina joined 14 other states in a regional effort to document abundance and distribution of Eastern Golden Eagles wintering in the Appalachian Mountains. We are learning that these birds occur in our NC mountains in the winter in greater numbers and for longer periods of time than previously perceived.  We set up trail cameras and dead (road-killed) deer at 9 stations in the mountains and documented golden eagles at 5 of those stations.  We trapped and transmittered an adult male Golden to document length of stay and to track migration paths to better understand habitat needs and threats along the way.  As a bonus, the cameras documented a wide variety of scavengers, from bobcats and ravens to the elusive Eastern spotted skunk.” 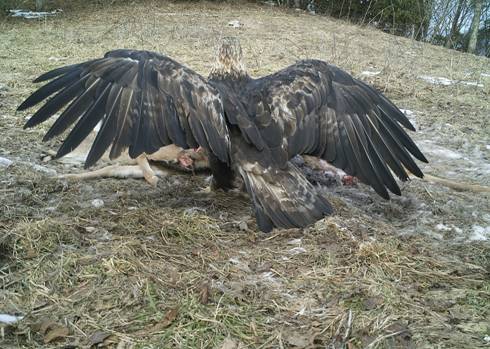