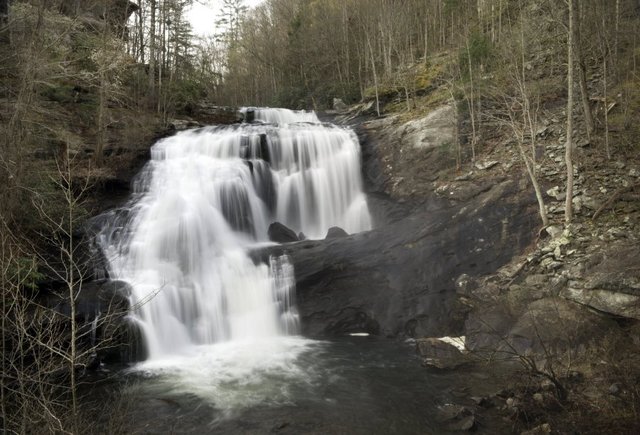 Back in February, I traveled to Tellico Plains, Tennessee, for a Saturday afternoon meeting. When my meeting was over I decided to drive a few miles down the road to see Bald River Falls, one of the most visited waterfalls in Tennessee.

Visually spectacular at over 80 feet high, Bald River Falls is the gateway to the Bald River Wilderness Area, a place permanently protected by Reagan’s signature three decades ago.

It was a rainy and chilly 33 degrees, the bridges were freezing over, and to my surprise on that late February afternoon, the Tellico River, alongside the Bald River, was teeming with kayakers. Slowly passing by people in wetsuits, carrying their kayaks, I peered at the cars and license plates on the side of the road:  Pennsylvania, New York, Iowa, Texas, Colorado and Oregon. These people were serious whitewater enthusiasts and the reason they had chosen to be in rural Tennessee on a wet and bone-chilling weekend in the middle of winter was because of the Tellico River’s clean and clear rushing waters.

As we all know, it is not just the kayakers who have discovered this outdoor paradise.  Throughout the year, fly fishers, hunters, horseback riders, hikers, backpackers and thousands of windshield tourists journey to the Cherokee National Forest. Along with year round recreational opportunities, outdoor related businesses from local sandwich shops to outdoor manufacturers (one of the largest maker of kayaks in the world is Jackson Kayaks in Sparta, Tennessee) are locating in Tennessee. In fact, a recent study by the Outdoor Industry Association estimates the  outdoor recreation industry in Tennessee generates $8.2 billion in consumer spending each year and creates 83,000 jobs.

An  entrepreneur once told me that every successful business needs a “special sauce,” that extra “something” that separates a place, product or business apart from all the others.

For Tennessee’s wilderness areas, clean and clear water is the ‘special sauce’.

And the reason the surrounding streams, creeks and rivers are so clean and clear is because the Tennessee Wilderness Act of 1984 made it so.

Three decades later, Reagan would be proud of the bill he signed into law, but I imagine he would say today the job is not finished.

Upon passage this bill will permanently protect the headwaters of the Upper Bald River, by designating one new wilderness area, The Upper Bald River Wilderness, and by adding additional acreage to five others in the Cherokee National Forest, assuring kayakers, fishermen, hunters, local businesses and future generations will forever have clean and clear water.

And then, read them President Reagan’s own words.

“I just have to believe that with love for our natural heritage and a firm resolve to preserve it with wisdom and care, we can and will give the American land to our children, not impaired, but enhanced. And in doing this, we’ll honor the great and loving God who gave us this land in the first place.”  Remarks to National Campers and Hikers Association in Bowling Green, KY, July 12, 1984