Little River Canyon has grown into a scenic treasure 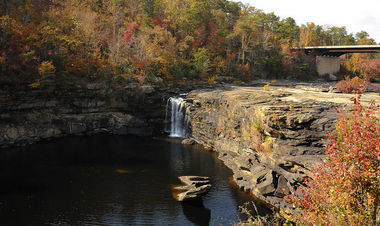 A few years ago, I broke down, dispatched my old “flip phone” and bought an iPhone.

Recently, I came upon a long forgotten picture taken a little more than year and half ago. It was a photo of Susan Livingston and Patty Warren, the daughters of the late congressman Tom Bevill, proudly smiling and standing by a portrait of their father at a ceremony celebrating the 20th anniversary of the Little River Canyon National Preserve at the Jacksonville State University Canyon Center.

Susan, a respected attorney in Birmingham and beloved civic leader had passed away very suddenly, in early 2014.

Twenty plus years ago, we didn’t have a camera phone in our pocket.  We didn’t take pictures or “selfies” of our every movement and moment, but we do have our memories. Congressman Bevill and his family loved Little River Canyon and his constituents in his district. In the early 1990s, he proposed piecing together several State of Alabama and Alabama Power properties creating a National Park, the first and still only National Park in Alabama dedicated to a natural area.

It seemed like a slam dunk piece of legislation. Local country music star Randy Owen had brought attention to the area by penning a hit song titled “Pass It on Down,” describing his childhood memories swimming and playing in the Canyon and the importance of keeping the water clean and saving it. The public officials supported the idea because the land desperately needed to be restored.

For years, Little River Canyon was infamous as a place where people would crash abandoned cars into the canyon. There were safety issues and a lack of law enforcement, resulting in an uptick in crime, even drug dealing.

Despite the troubles, news of a National Park did not sit well with some in the community.  Anti- federal government sentiment ran high, false rumors that the National Park Service would “take” people’s property was rampant. Whipped into a frenzy, Congressman Bevill was hung in effigy at a gas station outside the proposed park. Even hometown hero Randy Owen’s family and property were threatened.

Despite the intimidation, Rep. Bevill and park allies held firm.  Bevill welcomed the support of Senator Richard Shelby.  JSU developed partnerships. The community rallied. They knocked down the rumors and endured the dirty tricks.

The legislation creating the Little River Canyon Preserve passed in the Fall of 1992. The opposition melted away. Then the real work began protecting the canyon, its visitors and building the Canyon Center.

The Park Service cleaned up the area, and provided the public safe and secure access to enjoy the canyon for hiking, biking, birding, hunting, watersports and sightseeing. They invested in the park, staffing 15-20 National Park Service employees, making the place welcoming. The congressional delegation, did their part, worked across party lines, secured monies from Congress to construct the multi-million dollar Canyon Center, a partnership between Jacksonville State University and the Park Service. The building is a “gateway” to the canyon and an educational resource.

According to local tourism officials, 20 years ago the Little River Canyon area had virtually “zero” organized tourism before the establishment of the National Park. Today, the park draws between 250,000-300,000 visitors annually from all over the country. The park and Center are now an important economic asset – a job creator and attraction for a region that has been hard hit by two decades of economic downturns.

Earlier this summer, I attended a reception at the Canyon Center for the Jacksonville State University Board of Trustees.  Over 100 people attended. JSU’s Pete Conroy hosted. JSU Trustee Randy Owen was there.  So was Patty Warren. They laughed, cried, told “war stories,” remembering both Susan and Congressman Bevill. All beamed with pride about the park. They didn’t allow the naysayers and anti-park people to win. They saved a special place and today share it with the world.

The tree that will be planted, like all newly planted trees, will struggle to grow. It will need to be nurtured, watered and loved. But it will thrive, because like Susan and her family, it will symbolize the deep devotion all Alabamians have for Little River Canyon.

Pat Byington is executive director of Wild South, a regional conservation organization dedicated to the protection of the South’s public lands.