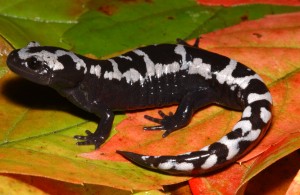 The Marbled Salamander is a small species and grow to be about 9 – 10 inches in length once fully grown with a stout body and white crossbands across their back and tail. Males and females are visually distinct in that the females’ crossbands are silvery, while males have bright white crossbands. Juveniles do not have these crossbands, and instead have white or gray flecks.

The Marbled Salamander is found in most of the southeast, but are absent from the Florida peninsula. However, they can live as far west as Texas and have been found along the shore of Lake Erie and Lake Michigan. They occur in a wide variety of habitats, such as low-lying floodplains, the lower elevations of Appalachian Mountains, wooded hillsides, or dry hillsides. While their range is so large, they are often seldom seen because they are fossorial. This means that they live underground.

The Marbled Salamander is nocturnal and during the daylight hours they bury themselves or hide beneath logs or other ground cover, and are most often encountered on wet nights when they migrate to wetlands to breed. Except for the breeding season, they are very solitary. These salamanders breed from October to December, and the eggs are laid on land under logs or in clumps of vegetation. 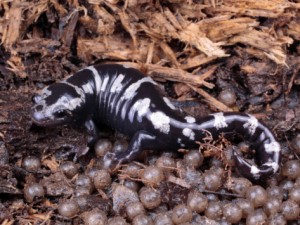 The eggs are laid at the sites of vernal pools or temporary wetlands because they lack the fish that a permanent wetland would likely have. Because the eggs are laid on dry land, the female curls her body around her clutch to keep them moist, and waits for the rain to come. The 30 – 100 or so eggs that she lays will hatch once enough water fills the wetland to trigger them.

If there is no rain in winter, they are able to survive in their eggs until the spring rains come. Once the larvae hatch, the mother leaves them to go back to her life and 2 – 9 months later, they complete metamorphosis and can leave the water as juveniles. 15 months later, the juveniles reach maturity.

The diet of an adult Marbled Salamander consists largely of invertebrates and insects. They will eat earthworms, slugs, snails, centipedes, crickets, etc… The larvae eat zooplankton when they first hatch, but as they grow larger and become less vulnerable they start eating larger organisms such as tadpoles, isopods, and the larvae of other salamanders.

Marbled Salamanders are not protected in the southeast because they are considered common here. However, because they are so dependent on vernal pools and temporary wetlands to reproduce, there is cause for concern that habitat loss will cause drops in their population as urbanization results in the further destruction of their habitat.

Interestingly enough, the Marbled Salamander has evolved toxins in its tail to keep predators from eating it, and is also the proposed State Salamander of North Carolina.