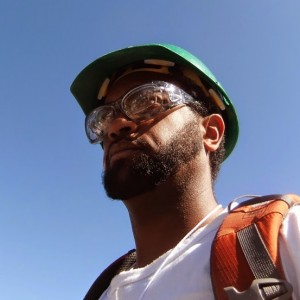 Nkrumah Frazier was born in 1978 outside the small rural town of  Soso, MS. He grew up on a farm raising cows, hunting and fishing and gardening.  As a child he spent the majority of his time outside with his older brother and many pets. Frazier graduated in high school in 1997 and went on to college the following year. For the next few years he struggled to make good grades while also working full time.

Frazier met his wife in a college class and married her when he was 25. They had children and as they grew he realized that they were not getting the same experiences growing up and playing outside that he had. Frazier began to take his family on short hikes and bird watching trips.

At the age of 30, Frazier finally received his Bachelor’s degree in environmental biology from the University of Southern Mississippi. During his final 2 years as an undergraduate at Southern Miss and a few years after graduating he worked full time as an animal keeper at the Hattiesburg Zoo. He is now a research technician in the Biology Department at Southern Miss. Frazier works on a project attempting to ascertain the effects of the Deepwater Horizon Oil Spill on the fish communities of the Mississippi Gulf Coast.

In 2012 and 2013, he was a member of the Outdoor Afro Regional Leadership Team. As an Outdoor Afro he leads excursions into the outdoors. Around that same time he founded the South Mississippi Family Nature (FaN) Club.  His goal with the FaN Club is to reconnect families and especially children and young adults to nature. It is Frazier’s hope that through various outdoor activities we can instill and encourage a love for the natural world in our community and beyond.

Nkrumah Frazier began volunteering with Wild South about a year and a half ago. Now as a staff member he hopes to help further the organization’s efforts of stewardship of the forests of the Southeastern United States.