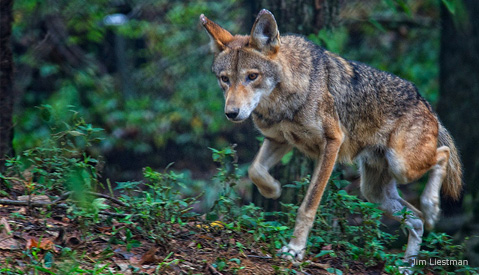 The red wolf (Canis rufus) is one of the world’s most endangered canids. Once common throughout the eastern and southcentral United States, red wolf populations were decimated by the early part of the 20th Century as a result of intensive predator control programs and the degradation and alteration of the species’ habitat.

The red wolf was designated an endangered species in 1967, and shortly thereafter the U.S. Fish and Wildlife Service initiated efforts to conserve the species. Today, more than 100 red wolves roam their native habitats in eastern North Carolina, and nearly 200 red wolves are maintained in captive breeding facilities throughout the United States.

Two agencies are responsible for the protection and recovery of this species, the North Carolina Wildlife Resources Commission and the US Fish and Wildlife Service (USFWS). Recently the USFWS released a report evaluating the red wolf recovery program. While some shortcomings and challenges were noted the report outlines opportunities for success. Despite 27 years of population growth and advances in research the NCWRC has arrogantly decided that the Red wolf has no right to exist. This tragic and politically motivated stunt comes on the heels of the NCWRC being forced to no longer allow night hunting of coyotes, a move which precipitated the deaths of several red wolves.

The NCWRC has passed a resolution asking the USFWS to remove the Red wolf from the endangered species list and declare the species extinct!

If you believe in the rights of species to exists, the integrity of the Endangered Species Act, and the mission of the USFWS to recover endagered species then TAKE ACTION! Tell the USFWS not to let NCWRC undermine its mission and destroy the wildlife it has vowed to protect.