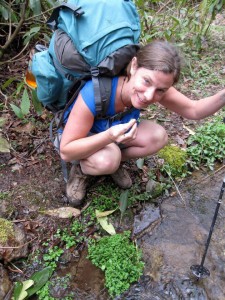 Kayah is most at home in the wilderness and other wild places. Growing up in the Southern Appalachian mountains, Kayah spent her free time climbing trees, hiking to waterfalls or big vistas, and catching crawdads in the creeks. As she grew older she noticed some of her wild places began to change or disappear with the impacts that humans were having from a combination of poor wilderness practices, urban development, the invasion of nonnative and invasive plant species, and pollutions. While watching one of her favorite natural views become dotted and then overcome with signs of urban sprawl, Kayah knew that she had to do what she could to protect this from happening everywhere. Kayah enthusiastically began working with Wild South in 2013 as a Linville Gorge Wilderness ranger. She views her work as an opportunity to teach people about wilderness stewardship and how they too can make a positive difference in the natural world around themselves. Kayah’s work mostly involves locating the invasive plants and removing them with groups of volunteers. And yes, she still climbs trees, loves hiking, and catches crawdads.