While searching for the Rusty Patched Bumble Bee is a big goal of Wild South’s citizen science project, this federally endangered species is not the only focus. Several other species found in our region are at risk of extinction or currently suffering population declines. By collecting as many observations of all species of Bumble Bee on iNaturalist as possible, we will be able to determine how these species’ distributions are changing and what we can do to protect them, before it is too late.

The Xerces Society for Invertebrate Conservation keeps a list of the Bumble Bee species they feel are most at risk of extinction using data from the IUCN Red List. Here we will go through the species found in our Southeast region that are high priorities for us to locate. Keep an eye out for these priority species on your next hike or even your flower garden and make sure you are uploading photos to our iNaturalist project!

To join our project, email morgan@wildsouth.org and happy spotting! 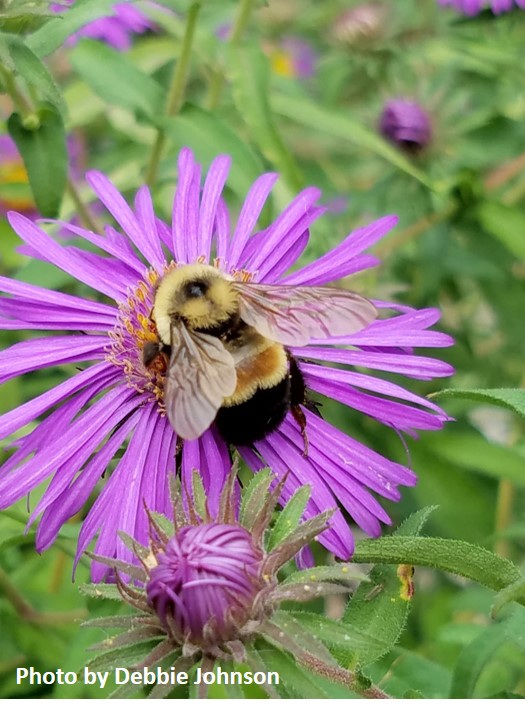 Our project is focused on the Rusty Patched Bumble Bee because they are the first of any Bumble Bee species to land on the United States Endangered Species List. In the last 20 years,  the relative abundance of this species has decreased up to 95% and their once wide range has shrunk by 70-87%.

While they haven’t been seen in the Southern Appalachian Mountains since 2004, that doesn’t mean there might not still be a hidden population out there! Look for them on wildflowers, especially in the areas highlighted here. 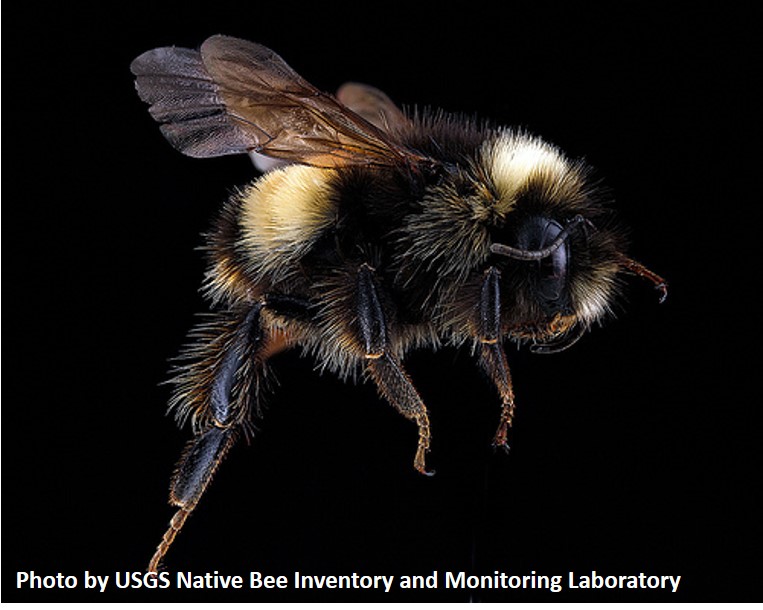 The recent population crash of the Yellow-banded Bumble Bee has occurred primarily in the Southern portion of their range. Once widespread agricultural pollinators, they are now found only in isolated patches, forcing many farmers to rely on captive hives.

This Bumble Bee is an important pollinator of potatoes, alfalfa, raspberries and cranberries so look for them the next time you are in your garden! 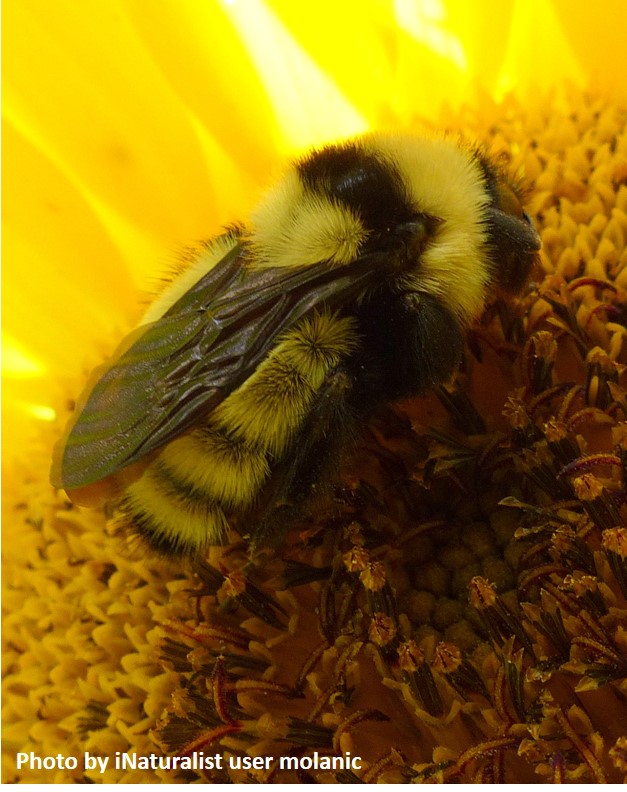 This species has only just begun to decline, making now the perfect time to find and protect the Yellow Bumble Bee. Vulnerable to extinction, this Bumble Bee can be found along the Northern edge of the United States and follows the Appalachian Mountain range into South Carolina.

Yellow bumble bees spend most of their time pollinating the thistles, clovers and bee balms found in open fields and meadows. 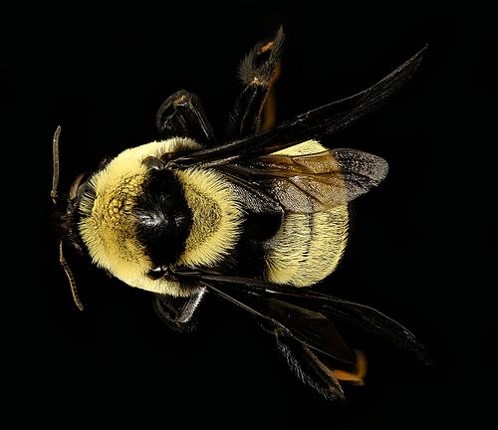 The population of Southern Plains Bumble Bee has declined by about 30% in the last decade as the open plains they rely on as a food source are converted into farmland. Due to these declines, they are considered endangered by the IUCN Red List, though they do not yet have the protections of the United States Endangered Species Act. Finding (or even not finding) this species could lead to action being taken place to protect their vulnerable habitat.

In the Southeast, Southern Plains Bumble Bees can be found up the coastline extending west to the edge of the Appalachians. Look for them on prairie walks or in urban gardens. 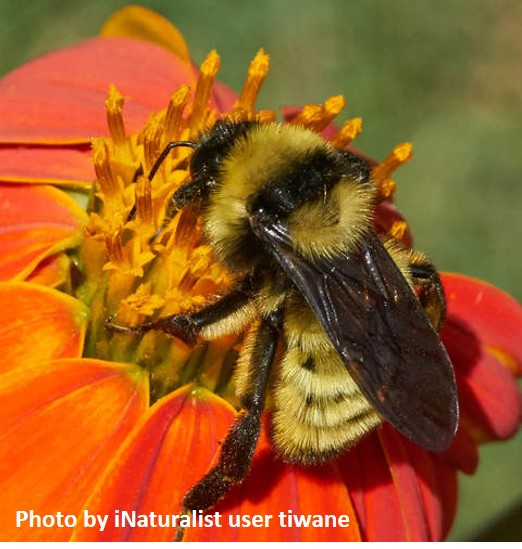 Even a species as historically common as the American Bumble Bee is not safe from the same declines suffered by other Bumble Bee species. In the first half of the twentieth century, 30-45% of all Bumble Bees recorded were this species. Today, they make up only about 5% of all observations.

American Bumble Bees can (hopefully) be found in open farmland and fields across nearly all of North America.

Cuckoo Bumble Bees are unable to raise their own young and instead, lay their eggs in the colonies of other species of Bumble Bee, parasitizing their resources as they raise larvae that are not their own. Often, a species of Cuckoo Bumble Bee is dependent on only one or two non-parasitic species. When one declines, so does the other. 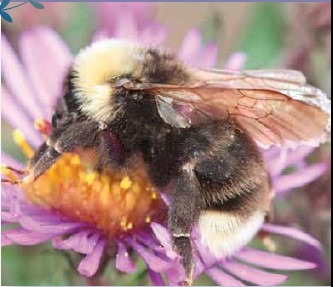 Ashton’s Cuckoo Bumble Bee is currently known to occur in only a handful of sites in North America and they have seen declines of up to 97% since the year 2000. Part of this decline has to do with the declines of their host species, the Rusty Patched Bumble Bee and the Yellow-banded Bumble Bee.

Due to their relationship with other species of Bumble Bee, Ashton’s Bumble Bee maintain a similar range and habitat across the Northern United States. Like the Yellow-banded and Rusty Patched Bumble Bees, this species is extremely rare in our area, but look for them in edge habitats near extensive forest. 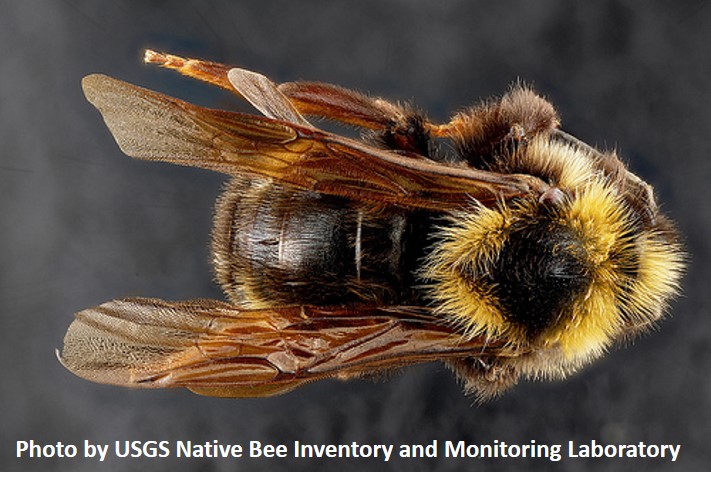 The Variable Cuckoo Bumble Bee is the rarest

of the Bumble Bees on this list, having not been seen in the last decade and feared extinct. Obviously, spotting one as part of our project would be an amazing opportunity to protect and help save an entire species. The decline of this species began in the 1920s and continued to now, showing us what can happen when early action is not taken.