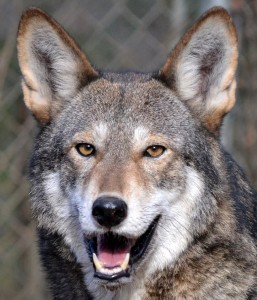 On a recent trip to the red wolf recovery area in eastern North Carolina, Terry Deal, Wild South Board Chair, and I were able to learn about this remarkable animal, knowing that it roamed within howling distance from where we stood. Kim Wheeler, Executive Director of the Red Wolf Coalition, gave us hours of her time to update us on what is happening there, on the ground.

Our sense of urgency grew as we learned that the wild population is now less than 50 individual wolves, from an estimate of less than 75 earlier in 2015, and a peak of 131 several years ago. We are at a historic threshold for the red wolf.

If you’re like I am, you‘ve become tired of voyeuristic media and sensationalism. So it is with no lack of thought that I look at the natural history timeline of the red wolf and ask, “Will this magnificent mammal become extinct in the wild this year after persevering for 200 millennia?”  That is at least the span of time during which the red wolf branched off as a distinct species from the eastern (Canadian) wolf and the coyote. The more famous gray wolf, canis lupus, had not yet arrived from Eurasia. The red wolf is the native wolf of the southeast.

I urge you to take action and to demand the reinstatement of the Red Wolf Recovery Program. Let’s not let 2016 to be the last year of red wolves running free in the wild.