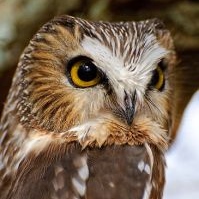 When a Saw Whet Owl kills its prey it only eats half of the carcass, hanging the other half on a branch to eat later. In the winter when that half freezes, instead of hunting for another, fresher kill, the owl will simply “incubate” the meat exactly as they would incubate their eggs. This naturally thaws the meat and allows the owl to eat his leftovers with ease.

The Saw Whet Owl is one of the smallest species of owl. They do, however, have relatively large heads and wingspans. They are also heavily feathered with many intricate patterns that alternate between dark brown, gray, and white on their feathers. Unlike many owls they do not have ear tufts. Instead, they have a prominent facial disk which amplifies sound.

The Saw Whet Owl, like most other owls, is nocturnal, starting the hunt just after sunset and ending just before sunrise. As opportunistic hunters, they perch on branches and fence posts and rely on their prey to come to them. With huge eyes and extremely sensitive hearing, the Saw Whet Owl is an ideal night hunter. Once they have locked onto their prey, they use their strong talons to capture the animal. The Saw Whet Owl’s diet mainly consists of woodland mice, especially deer mice, voles, shrews, juveniles of small mammals such as chipmunks, sometimes small birds, along with insects such as grasshoppers and beetles. 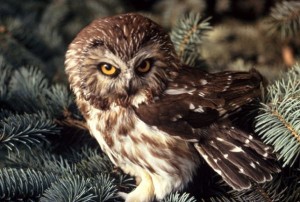 Except during breeding season, the Saw Whet Owl is solitary and nomadic. When confronted with a predator or a human their main defense is to remain motionless. This typically leads people to believe that they are a tame bird, which is not the case.

The Saw Whet Owl can be found all over the United States and though their migration patterns often end at a minor local shift, they have been known to migrate between northern breeding ranges and southern North America. The Saw Whet Owl is not an endangered species, but that does not mean it is safe. As humans continue to log old growth forests, the owls lose their natural habitats. Furthermore, the pollution of water and air by the paper and timber industries threatens the well being of the Saw Whet Owl.