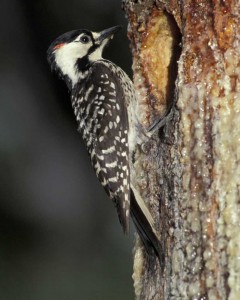 BROOKSVILLE, Miss.— Two conservation groups and a long-time volunteer have reached landmark settlement agreement with the U.S. Fish and Wildlife Service that will lead to better protection for endangered red-cockaded woodpeckers on Mississippi’s Noxubee Wildlife Refuge. The agency has agreed to prepare a new management plan for the refuge and to suspend any new timber harvest until that plan is complete.

“We are elated that we were able to achieve our goals in this case through settlement,” said Tracy Davids of Wild South. “Prior management at the refuge resulted in the steady decline of the endangered red-cockaded woodpecker, and a new conservation-based approach is clearly needed.”

Red-cockaded woodpeckers, once common in the Southeast but now endangered, need old trees in longleaf pine forests to survive. Over the past few years, logging on the Noxubee National Wildlife Refuge — including logging inside red-cockaded woodpecker habitat — has increased, resulting in the bird’s significant decline. The refuge was also failing to notify and involve the public before developing logging proposals.

“National wildlife refuges should be safe havens for America’s wildlife, especially in this time of climate disruption,” said Marc Fink, an attorney with the Center for Biological Diversity. “This agreement should get the Noxubee National Wildlife Refuge back on the right track to a place where the conservation of endangered species is its highest priority.”

In agreeing to prepare a new, comprehensive conservation plan, Fish and Wildlife also agreed to revise the agency’s “red-cockaded woodpecker management plan” as well as the forest management plan for the Noxubee. The Service also agreed that public participation would be allowed for any future proposed logging projects.

The agreement, approved by a federal district judge today, settles a lawsuit filed in 2012 that challenged logging plans in the refuge. Plaintiffs in the lawsuit were Margaret Copeland, a long-time volunteer on the Noxubee National Wildlife Refuge, Wild South and the Center for Biological Diversity.

The Center for Biological Diversity is a national, nonprofit conservation organization with more than 450,000 members and online activists dedicated to the protection of endangered species and wild places.

Wild South is a regional organization working to inspire people to enjoy, value and protect the wild character and natural legacy of the South. Learn more biologicaldiversity.org.