Around 1700, the Cherokee people were a powerful tribe of Native Americans who were uncontrolled by world powers and politics because of their remote and isolated homeland that lay west of the Appalachian Mountains. The seaboard colonies of the British Empire were 250 miles eastward on the Atlantic coast. The Cherokee enjoyed vast expanses of wilderness where they hunted, farmed, fished and contended with their enemies in martial challenge. Their way of life would change dramatically as the small and seemingly benign settlements of English Colonists encouraged swarms of European immigrants to resettle in the Colonies. 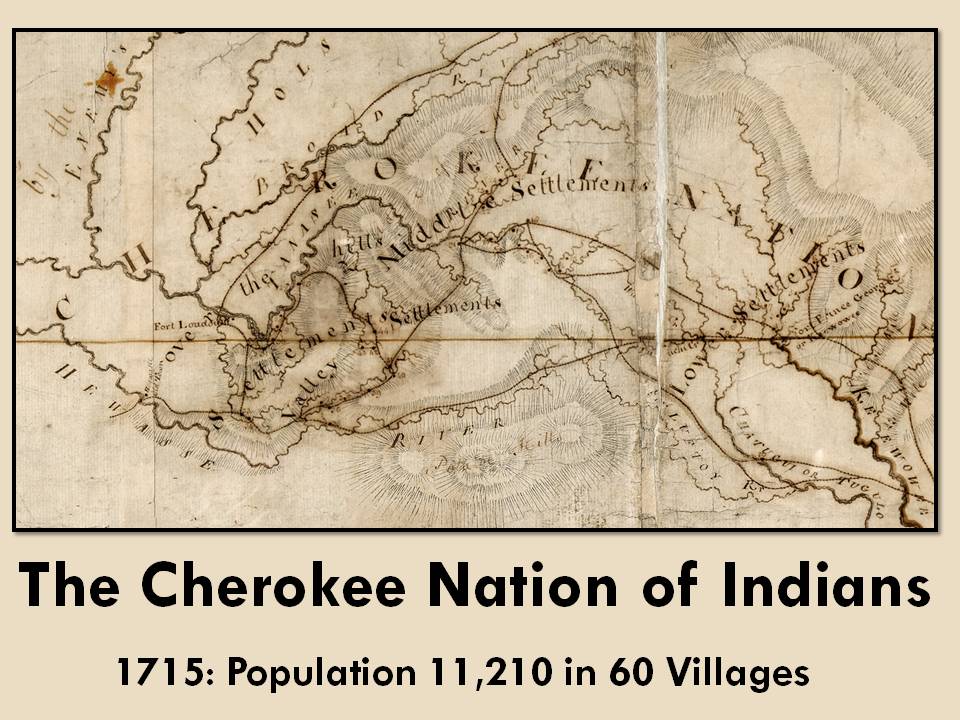 At the same time the white populations were exploding, the Native Americans dwindled in number from diseases introduced from Europe and wars with colonial powers who were contending with each other for control of North America.

The lifestyle of the native tribes evolved differently than that of the Europeans. Their way of life generally was not based on the accumulation of wealth and power although rank and honor were highly esteemed. 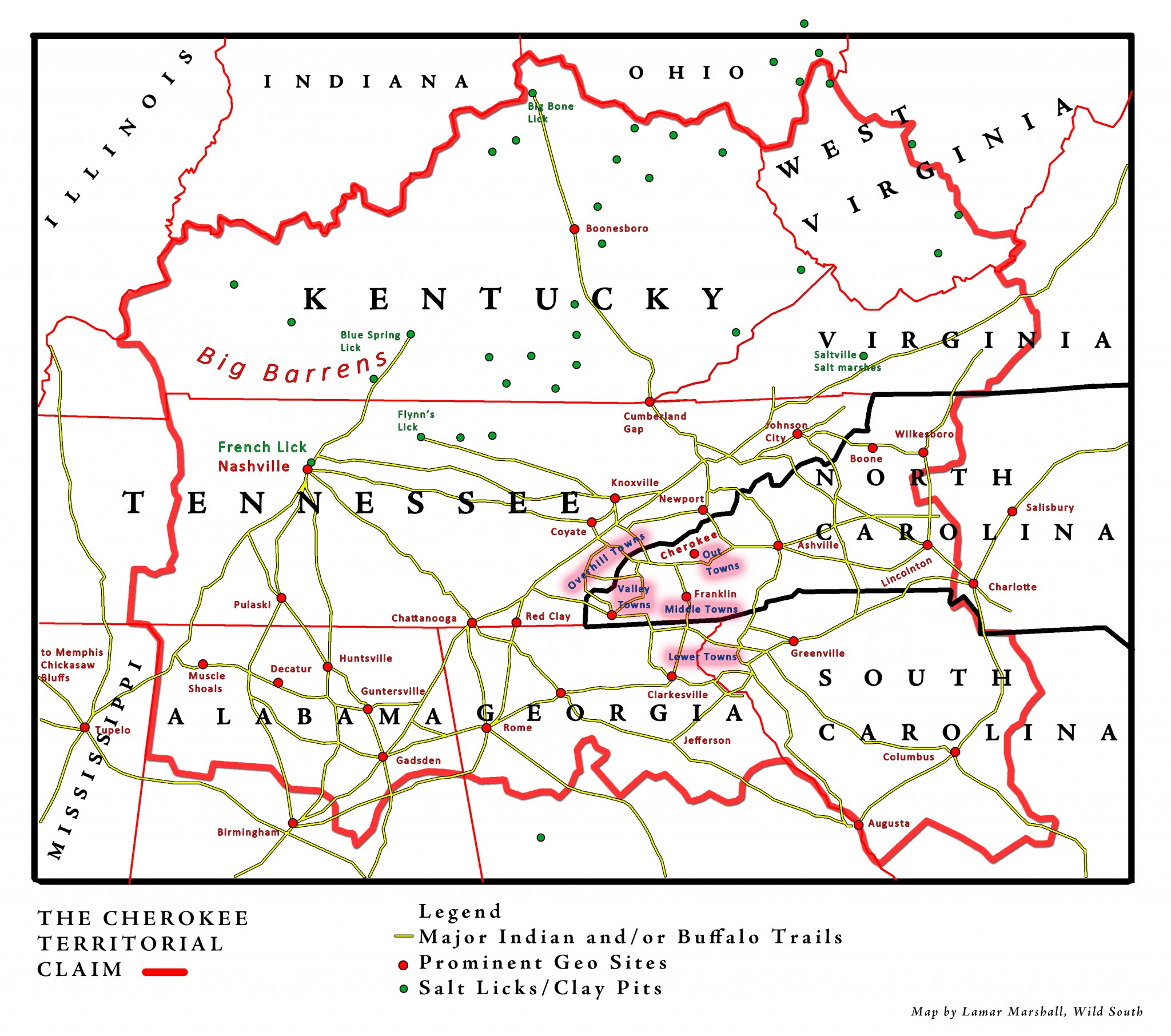 When the Americas were discovered by Europe, three principle European countries, armed with their technologies, fought each other to determine who would claim and profit from the land, minerals, forests and native peoples. It took nearly 300 years for England to overpower Spain and France by military force. Soon after, the English colonies rebelled against their king and the Revolutionary War stripped England of her North American victory. The colonies became “states united” but the spirit of conquest was not to end in peace. It turned from the Atlantic seaboard and began its march over the Appalachian Mountains to trample the native peoples whose lands were coveted by governments, profiteers and speculators.  With the handwriting on the wall, the Cherokee and other Eastern tribes knew they were on a collision course with this new United States. The tribes would be forced into ceding millions of acres of lands through treaties that guaranteed new Cherokee boundaries “forever.” Every treaty was violated and eventually the United States evicted the Cherokees from their homeland. 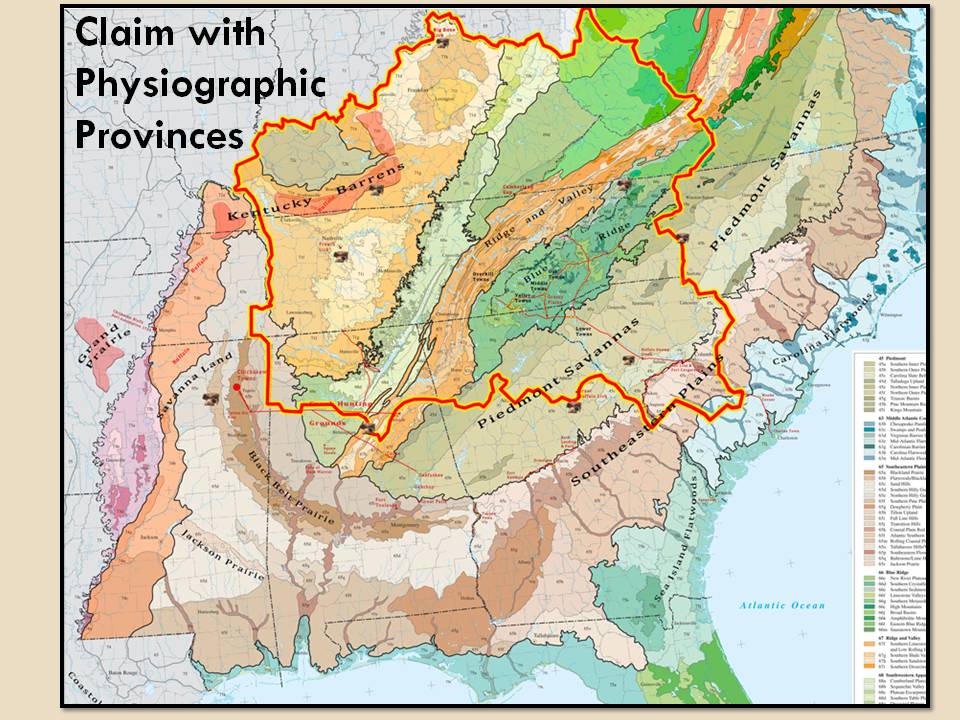 The Cherokee claim was a vast and diverse storehouse of natural resources spanning many ecosystems.

The Native Americans did not think of land as something to be surveyed, subdivided and privately owned.  It belonged to no one except the Creator and the tribes who could defend their territorial claims. Many of the first European settlements were business ventures financed by corporations. Investment, labor, products and overseas exports were the bottom line. Gold, silver, furs, skins, plantation produce, tobacco, timber, pitch, rice, and slaves were a few of the commodities that colonists traded from the Indians. It didn’t take long to add land to the economic interests of Europe.

This vast continent of 9 1/2 million square miles inhabited by Indians whose technologies were primitive by European standards was viewed as an opportunity to fill European coffers. Many aristocratic and wealthy colonists with a little capital became speculators who invested their wealth into the business of transplanting Europeans to North America. England, France and Spain were the major players. 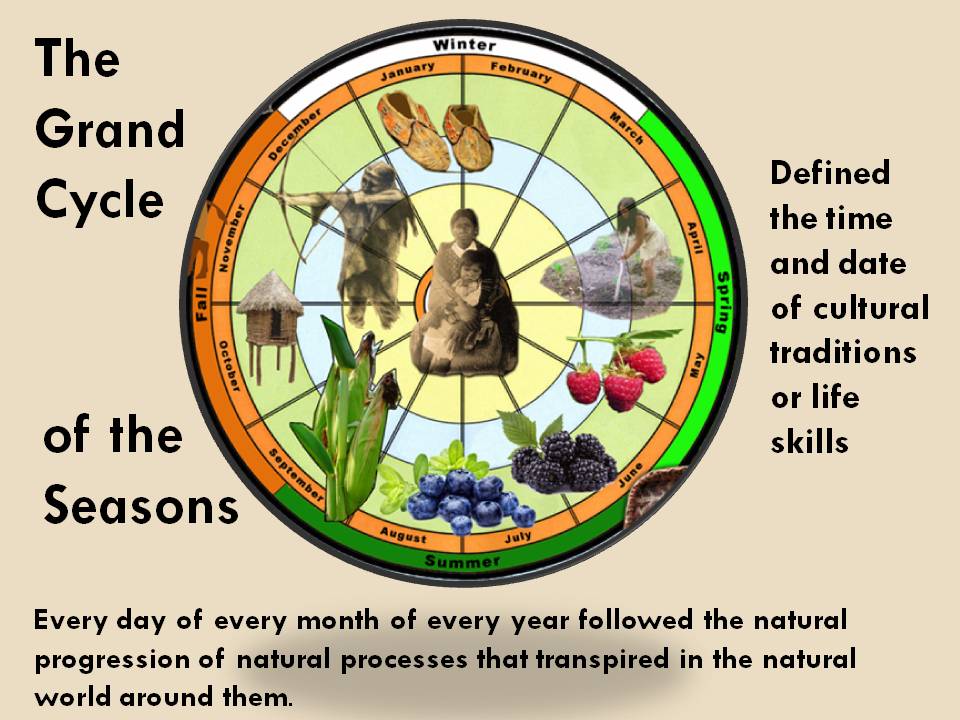 For millennia, a thousand or more tribes of Native America were able to control large expanses of wild lands that afforded all the meat, fish, birds, nuts, and wild plants needed for subsistence and prosperity. By supplementing the natural abundance with a few domestic plants, there was no need to tend herds of cattle or to develop technologies to support an alternative way of life.

Having not been exposed to the “industrial” developments and technologies of the Europeans, they were content to live the simple lifestyle passed down from their ancestors. Materialism and the accumulation of wealth was not a priority. With a relatively small population in ratio to the vast uninhabited lands, they enjoyed true sustainability until the Europeans encouraged and paid them to overkill animal populations for furs, hides and meat. 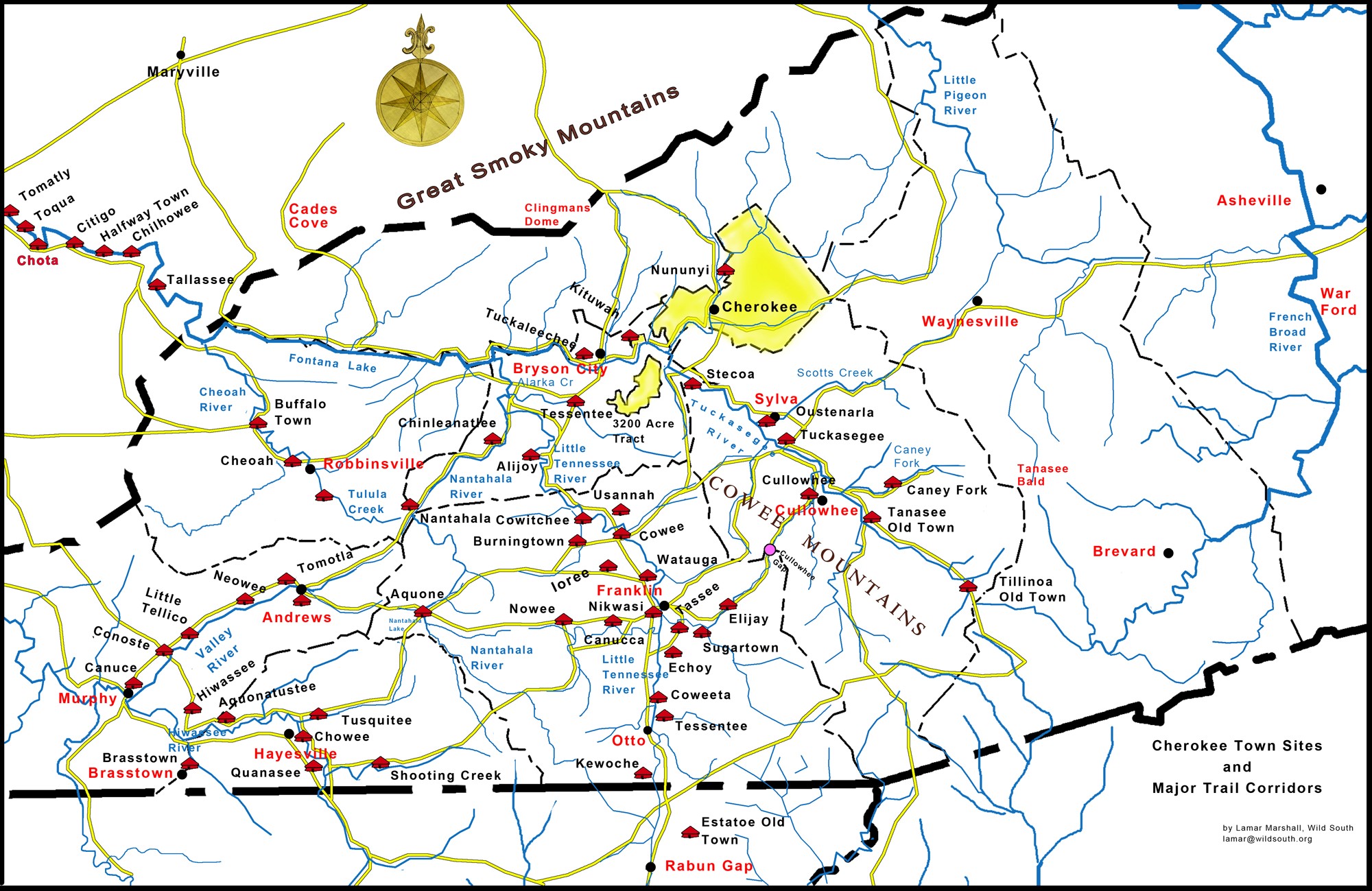 The Cherokee heartland centered in and around Western North Carolina. Qualla Boundary is shown in yellow.

Their bodies and minds were extremely acclimated to harsh winters and the rigorous physical demands of the rugged mountains that surrounded them.  The skills of martial warfare, the practice of long-distance running and stick ball kept them in top physical condition.  There was no place for slackers in a world where all food and clothing and other products had to be produced from the rocks, rivers, fields and forest. Clay was dug for pottery-making, crops were planted and harvested, fish were trapped and dried, meat was hunted and hides were cured. Enemies were perpetually making raiding incursions into the Cherokee country and they had to be dealt with vigilantly. The Cherokee experienced a self-reliance and freedom that are enviable in our modern overpopulated world with its increasingly impoverished natural environment.

The natural world supplied food, clothing, shelter and medicine.  The native peoples did not exceed the carrying capacity of the land and did not destroy mountains, rivers and species and lived free from the entrapments of the modern corporate lifestyle. 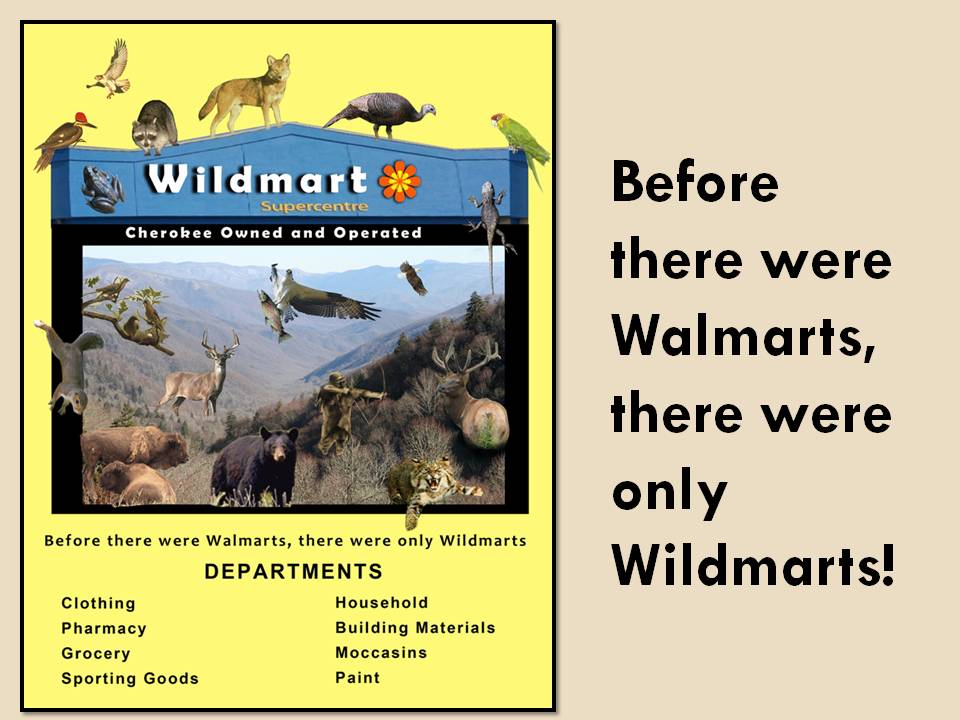 The natural world supplied food, clothing, shelter and medicine. The native peoples did not exceed the carrying capacity of the land and did not destroy mountains, rivers and species and lived free from the entrapment of the modern corporate lifestyle.

When the Spanish explorer Columbus found North America, there were an estimated two million natives. The following influx of Europeans introduced diseases among people who had no natural immunity and two-thirds of them died. This devastating population collapse left the Eastern Indians with few warriors to match the armies of three world powers who soon turned the continent into a battleground in their struggle for world domination. The trade that opened between Europeans and North American natives began as a mutual benefit to each other. Later, it would destroy the ancient native ways of life forever.

Wild South’s Cultural Heritage Program is made possible by funding provided by The Community Foundation of Western North Carolina, Cherokee Preservation Foundation, and generous contributions from supporters like you. If you have not yet, click here to make a donation to help continue this critical work.