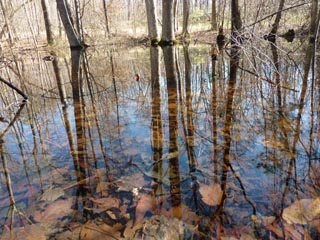 Their small, shallow breeding pond must be dry for part of the year, making it impossible for fish and other egg-eating predators to live there, yet be wet long enough for the salamanders to metamorphose. They are dependent on healthy, mature hardwood forests for their terrestrial dwellings.

In the southern United States, it is on a rainy night in January or early February, as late as March in Tennessee and North Carolina, that Spotted Salamanders crawl above ground and migrate to a nearby forest pond. When they reach the pond after their purposeful overland trek, the Spotted Salamanders go into the water where the males and females pair up on the leafy bottom. After fertilization, the female deposits a mass of clear, round eggs that are attached to a submerged branch or plant stem. Each egg contains a black speck that is the larva. Both males and females hide out on the bottom of the pond and wait for the next heavy evening rain, then emerge from pond water into rainfall and journey back to their separate burrows.

In the breeding pond, the eggs swell and the larvae develop and grow. A coating of beneficial green algae grows on the masses of eggs. In about two months, the eggs hatch and the larvae immediately begin hunting for food, such as small pond invertebrates and insect larvae, including mosquito larvae. They look similar to tadpoles but have feathery gills on either side of the head. By late spring, the larvae will transform, and on a rainy night will leave the breeding pond and begin their terrestrial life stage. At this point, they are only about two inches long and do not yet have the black and yellow coloration of mature adults. Adults are strikingly beautiful, with large, bright yellow or orange, dots on black or dark brown skin. Measuring six to nine inches long, they are among the largest salamanders.

In addition to helping control insect populations when the salamanders are in the larval stage, and being a good food source for other animals in their adult stage, most species of salamanders are soil–builders. They eat small insects, mites, grubs, ants and worms and, through digestion, these are “recycled” into organic matter and become soil. We would be nowhere without soil. Every living thing from the tiniest fungus and mold to the mightiest Redwood tree absolutely depends on it. Besides making soil, the Spotted salamander knows a few other tricks, such as re-generating, or re-growing, an arm, leg or tail when the salamander is lucky enough to escape after being bitten by a predator.

Acknowledgement: Thank you to Bill Sutton for assistance with this article.

Read more about Spotted salamanders and other amphibians that depend on our southern forests in back issues of Wild South magazine. Contact us for purchase info.