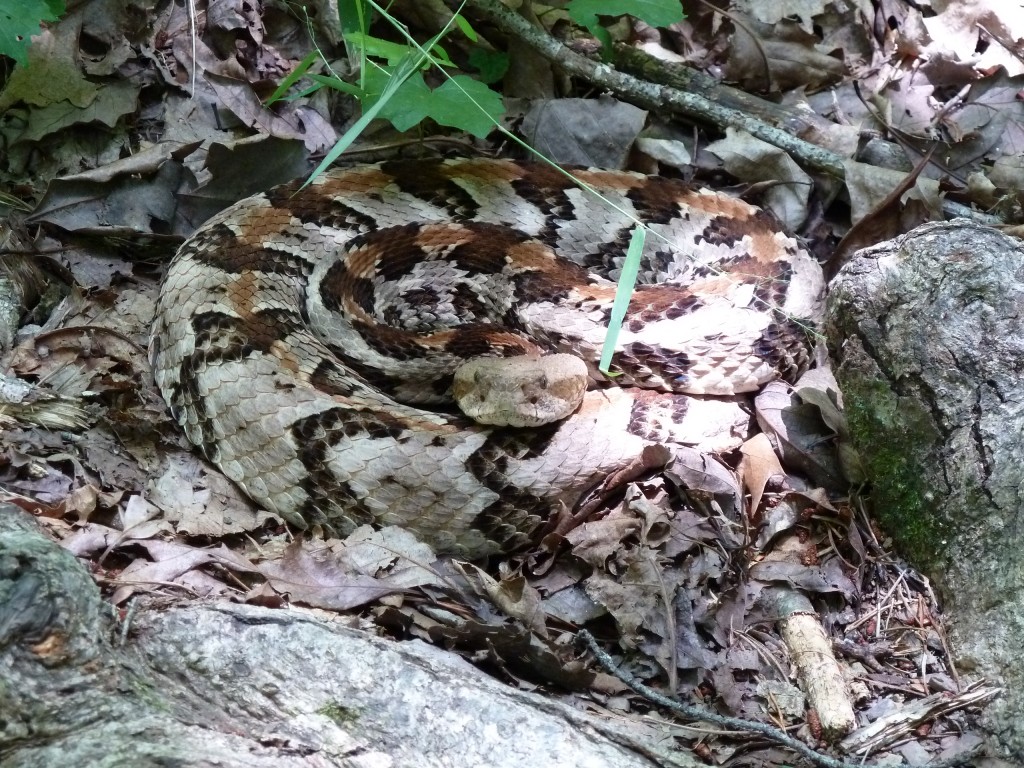 The Timber Rattlesnake will often rely on its superb camouflage to avoid detection opposed to using its rattle as a warning. This camouflage comes in two different color phases. The first is the yellow phase that has dark brown or black crossbands on a background of brownish-yellow. The second is the black phase where the brownish-yellow background morphs into a brownish-black.

These snakes have a fairly wide range throughout the southern and eastern parts of the United States, however, they are absent from most parts of Florida. Their primary habitat consists mostly of rugged deciduous forest but can potentially be found in a variety of locations. Exposed rocky outcroppings or sunlit gaps in the forest canopy allow the snakes an area to bask in for warmth. Over the winter months, these snakes hibernate in deep rock crevices often with many other snakes.

Timber Rattlesnakes become active by late spring and can still be seen until the onset of colder weather during the fall. While it does move around, this snake spends most of its time in a coiled ambush position waiting for unsuspecting prey to cross its path.

Prey consists mostly of small mammals such as squirrels, rats, mice, or chipmunks but birds and other small reptiles are fair game. Since the Timber Rattlesnake is a pit viper, it uses heat sensing pits to detect the body heat of nearby prey. The continual flicking of their forked tongue is another detection mechanism used to pick up unique scent signatures.

Once a suitable target is in striking distance the snake shoots out and injects the target with a dose of powerful venom. Unlike constrictors that crush the life from their prey, the Timber Rattlesnake will release the animal after striking and wait for it to die before moving in to devour it whole.

***   While Timber Rattlesnakes are not officially protected in the southern states their numbers are steadily declining due to habitat loss and other human activities.