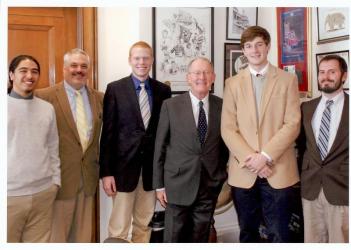 Recently we asked our TN Wild Interns to discuss their experience organizing communities and lobbying Congress to protect nearly 20,000 acres of Wilderness in the Cherokee National Forest.  Learn more about our campaign and take action by contacting your Senators today and urge them to pass the TN Wilderness Act right away.

If you ask twenty people what their opinion is about Wilderness, then you’re going to get twenty different answers.  Chances are though, that nineteen of those twenty people are pro-Wilderness.  Wilderness and the preservation of the environment is something that everyone agrees on at its basic level, “We need to protect pretty places.”  But Wilderness is much more important than that.  Nature should be protected for the preservation of animal and plant species, for clean water, for economic and tourism reasons, and more.

If I was one of the people asked why I thought Wilderness was important, this is what I would tell them and why I interned this fall with Tennessee Wild and Wild South: The outdoors have always been a part of my life.  Growing up, I spent most of my time outside doing various activities like hiking on the Appalachian Trail with my Boy Scout troop, or kayaking at the local state park.  I even remember seeing the “Big Laurel Wilderness” sign on the Appalachian Trail for the first time and wondering what it meant.   Nature has become a part of who I am, and if I had my choice, I would spend every day doing some sort of outdoor recreation. For most people, that is a good enough reason to have outdoor sanctuaries, and in this specific case, Wilderness areas.  While Wilderness for recreational purposes is important, that reason is only skin deep.  The need for Wilderness areas is a much more important issue besides having pretty views; Wilderness effects us and all the generations that come after us.

For me, the single most important reason that the environment should be preserved is the satisfaction that a certain area has not been destroyed by humans.  I believe anything that can’t be undone should always be reconsidered.  We live in an age where mountains are blown apart for the coal underneath them, and most of the Appalachian mountains have been clear cut at one point in time.  Humans can manipulate the world in a way that can’t be reversed, but we should refrain from doing so.

The Wilderness campaign insures that at least a small fraction of nature will not be destroyed.  While I know that not every area can be protected, I relish in the fact that one day, I can take my children and grandchildren to Big Laurel Branch Wilderness and say, “This is where I stood 40 years ago, and we, as a nation, decided that even though we could change all of it, we should leave it the way it is because once it’s gone, it’s gone forever.” There aren’t many things that we can leave behind for future generations.  Nature is one of them.

Interning with Tennessee Wild was an amazing experience, and going to Washington, D.C. with Jeff Hunter and the three other student interns this fall to support the Tennessee Wilderness Act of 2011 and the areas that I know personally was a once-in-a-lifetime experience.

Between the five of us, we were able to meet with the staffs of eleven Congressmen, and two Congressmen themselves, Lamar Alexander and Jim Cooper.  I had the privilege of meeting Senator Alexander, who sponsors the Tennessee Wilderness Act of 2011, and Representative Phil Roe (at an earlier date), and I was impressed about how approachable the men were.

They were both very excited about the Tennessee Wilderness Act of 2011 and ready to help in anyway they could.  They also made a point to mention how important the work we do at Wild South and Tennessee Wild is because it is the first step in democracy.  That is, getting the people to become vocal about what they want.

A truly special moment was when Senator Alexander said that he has been getting more newspaper articles about the Tennessee Wilderness Act of 2011 then health care reform. While in Washington, I felt like I was getting stuff done, and it was doing something that was personally important to me about an area close to my home.  It was very empowering.

Even though almost every office stressed that while they support the Act, the fiscal cliff takes precedent, I felt like I was something that was bigger than myself, and that by going to Washington, D.C. I was helping to make the world a better place.  Even though the acreage covered by the Tennessee Wilderness Act of 2011, 19,556 acres, just a little bit of the Cherokee National Forest, and even a smaller percentage of the world, that small amount will stand forever when the Act is passed, and my children and their children and their children will be able to look at the “Big Laurel Wilderness” sign on the Appalachian Trail and wonder what it means.

You can read about another of our intern’s experiences here.