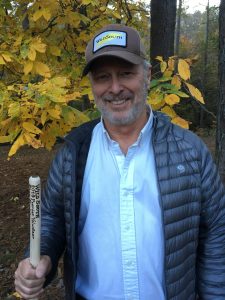 It was in October 2009 that Wild South’s first Premier Volunteer was named and awarded with a fine sourwood walking stick harvested, crafted and engraved by former Alabama Programs Manager Mark Kolinski.  That first Wild South volunteer to be honored was Ted Kuzma.  Every year since then, Wild South staff has given serious deliberation to the choosing of each Premier Volunteer, an award that is announced at our annual Volunteer Appreciation Picnic held in late October or early November in the Bankhead National Forest.

Last fall on the first Sunday in November, Volunteer Wilderness Ranger Tony Barber was handed the newest sourwood walking stick made by Mark and was declared Wild South’s 2019 Premier Volunteer, joining a long line of superstar Wild South volunteers.  Tony became a Wilderness Ranger in 2016 and has also volunteered for Wild South outside of that program.  Not only does Tony exemplify all the qualities of a reliable, hardworking, forest-loving volunteer, he brings food and cooks for us, plays guitar to entertain us, and is always our designated photographer wherever he shows up.  All this is done with a warm smile, kindness, a sense of fun, and great generosity of spirit.

We hope you enjoy this interview with Tony Barber.

When did you begin exploring and working in Alabama’s three Wilderness areas, Sipsey, Cheaha and Dugger Mountain?  And who or what is your inspiration as a lover of wild places and nature, and as a photographer? 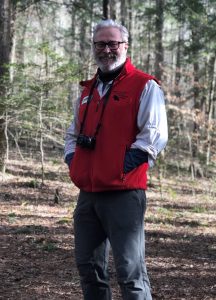 Tony Barber has continuously and selflessly given of his time to volunteer. Premiere volunteer of 2019, grandfather of two amazing kids, outdoor photographer, guitar player and all around humble guy!

I was eight years old the first time I spent the night in the Sipsey Wilderness. It was in the summer of 1964 (yes, I’m old). My Uncle Pete took me and his 10 year old son, Peter, on a three-day backpacking trip. This was well before it was a Wilderness. The first night was spent under the Borden Creek bridge. The following morning we had pancakes that had freshly picked “dewberries” in them. The second night was at the “Big Tree”, Alabama’s Champion Yellow poplar tree in the East Bee Branch Canyon.

It would take eleven years before I would return in 1975. That was when the Sipsey became the first designated Wilderness area east of the Mississippi River. Backpacking was really becoming a fad in the seventies and I got hooked after reading Colin Fletcher’s “The Complete Walker”.

I would love to say that my Dad was my inspiration but he died when I was young. So it was left to others and books to provide inspiration. That was when I found Mr. Colin Fletcher. I tried to do everything just like Mr. Fletcher. I bought all the same gear and tried to emulate him in every way.

Photography on the other hand just occurred naturally from my love of the outdoors. At the time I was bitten by the backpacking bug I was in college and an art major. All my college friends were either artists or photographers. They all looked so cool with their Army Surplus Gas Mask bags (that served as Camera Bags) slung over their shoulders. So, I bought a cheap Yashica TL Electro out of a Photography magazine ad and started taking it with me into the Sipsey Wilderness. I don’t have that camera any more but I still love to go in the woods and take pictures.

I still love to backpack. My wife and I used to travel to our favorite Wilderness area, the Sipsey, about every other weekend. She was diagnosed with Multiple Sclerosis sometime in the late 1980’s and is unable to go with me these days. But I still try to sleep in the woods several times a year.

Besides photography, what are your hobbies, interests, and passions outside of volunteering with Wild South? 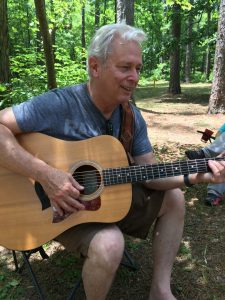 Tony playing guitar and singing at a Wild South event.

In addition to photography and backpacking, I love to flyfish. That, too, grew out of backpacking. It just seemed natural to bring along a packable flyrod and try to catch fresh fish for supper (or breakfast). And my hobbies tend to progress into compulsions. So, I build fly rods from time to time and tie my own flies.

And I play a little guitar. And buy guitars. And build guitars.

Now, I’ve taken to collecting old classic rock and delta blues LPs. My postal lady hates me because the boxed LPs don’t often fit in the mailbox and she has to drive up to the house to deliver them.

How has the threat of COVID19 contagion impacted your outdoor activities and how are you doing things differently now?

As a retired engineer it hasn’t affected me as much as others. I was already staying home and hanging out with my grandkids. However, before the pandemic,  I did meet former co-workers and friends every other week for drinks and lies. I miss that.

What is your favorite Wild South memory or achievement?

Some of my most wonderful memories with Wild South are the backpacking trips I’ve taken as a Wild South-er and recalling all the cool like-minded people I’ve met on the Wilderness trails while wearing the Wild South and USFS volunteer insignia.

But I would have to say my greatest memory and achievement was being selected as Premier Volunteer in 2019. That was indeed special. And a bit ironic I suppose. I joined Wild South to give back to the Sipsey Wilderness. I saw something on Facebook sometime in 2016 about becoming a volunteer. After having received so much goodness from the Wilderness, I thought it only right to give back. So, I joined. Loved it. I knew I had found my tribe. And then, to be given an award for paying something back … I don’t know. Ironic.

Now, I’m just waiting for the virus to go away or be cured or for us to learn how to live with it. I want to get back out in the Wilderness with Wild South and talk to others about how to not love the Sipsey to death.