What Not To Do In The Wilderness: Field Reports from a Mississippi Volunteer Wilderness Ranger 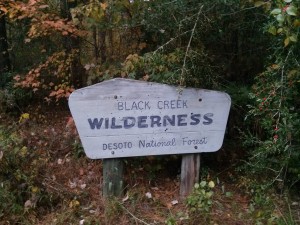 Recently while patrolling the wilderness section of the Black Creek Hiking Trail, I encountered several Leave No Trace and wilderness regulations violations. The most notable was a permanent campsite that was  recently developed. The campsite, and especially the fire ring, was directly on the trail. The now long gone campers had made a make-shift cooking platform with four large stakes. Each stake was about two and a half feet long. The top of each one had been bent and the stake secured into the ground to provide a stable cooking platform. There were several “seats” fashioned out of a large log that had been cut into long sections and stood up on end.

I got busy naturalizing the campsite and was enjoying the solitude of the afternoon when I began to hear voices. Shortly after that I heard several shotgun blasts. I immediately stopped what I was doing and grabbed my orange vest out of my pack and put it on before resuming the naturalization of the campsite. After a few more minutes I heard more gun shots, more voices and then a motorized boat started up and zoomed off into the distance. When I finally finished with the campsite, I placed the trash near the trail so I could pick it up on the way out and turned around to continue on my way. I had forgotten that the campsite was built on the trail, so when I turned around to resume my patrol I couldn’t immediately locate the trail, but after a few seconds I located a trail that disappeared into the forest. 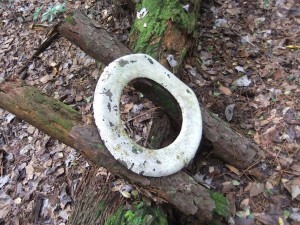 I started down this trail but little did I know it was the wrong trail. After about 20 yards I saw what appeared to be a toilet seat in the distance. I had inadvertently stumbled on the “bathroom” and trash pile for the campsite. Leaning against a large downed tree was a toilet seat that had been attached to two cut sections of a small log that could be used to sit and do your business. There was also a large trash pile. It looked like the perpetrators had good intentions of packing their trash out, because all the trash, which contained glass bottles (a wilderness regulation violation), was inside of a large black trash bag. That the bag of trash was left behind indicates that they generated more trash than they had anticipated. It is important to note that the website Wilderness.net notes that glass containers are not allowed in the Black Creek Wilderness.

As with any situation, proper planning goes a long way. If you plan to spend any time in the wilderness, please look into the regulations for that wilderness area and plan ahead. You can have just as much fun and maybe more if you plan ahead, obey all regulations and leave the forest like you found it. 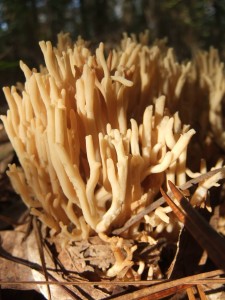