Rusty Patched Bumble Bees were once widespread across the Southern Appalachian Mountains, but their populations have been declining rapidly since the 1980’s along with many other bumble bee species across the Eastern U.S. In fact, the Rusty Patched Bumble Bee hasn’t been seen in the Southern Appalachian Mountains since 2004. The reasons for their decline remain a mystery, but the most likely culprits are habitat loss, residential and agricultural pesticides, and disease that escapes from captive bumble bee populations in greenhouses and infiltrates wild populations. That is why Wild South is working with citizen scientists to document bumble bees across the Southern Appalachians – we want to know why bumble bee species are in decline and re-discover the Rusty Patched Bumble Bee in this area so that they can get the protections they deserve.
With the help of a dedicated volunteer, Jake Faber, we have developed a map that gives us clues that will help our citizen scientists focus their efforts to search for the Rusty Patched Bumble Bee. Through a process called “Maximum Entropy Modeling”, or Maxent for short, Jake was able to use historical locations where Rusty Patched Bumble Bees were found coupled with environmental variables like elevation, slope, climate, and land use (e.g. forest, agriculture, residential, etc.) to predict where suitable habitat for the species still exists.

The map below shows where suitable habitat likely still exists for the Rusty Patched Bumble Bee in Western NC. The warm colors are areas with the most suitable habitat, with red being the best of the best. The cool colors are areas where the habitat may not be suitable for the species. In this map, you’ll notice that there are pretty obvious hot-spots. Can you pick out what those areas are? Below we’ll go through each one of the hot-spots depicted on this map to give guidance on where you might have the best chances to find a Rusty Patched Bumble Bee. That doesn’t mean it isn’t still important to keep submitting observations from other areas though. A mantra in the scientific community is that “all models are wrong, but some are useful”, so while this model will potentially give us some good guidance, it is still entirely possible that a remnant population of Rusty Patched Bumble Bees could exist outside of one of these locations. Also, although the main purpose of this project is to find a Rusty Patched Bumble Bee, there are many Bumble Bee species out there that we need to know more about, so observations from all over the Southern Appalachians are encouraged! 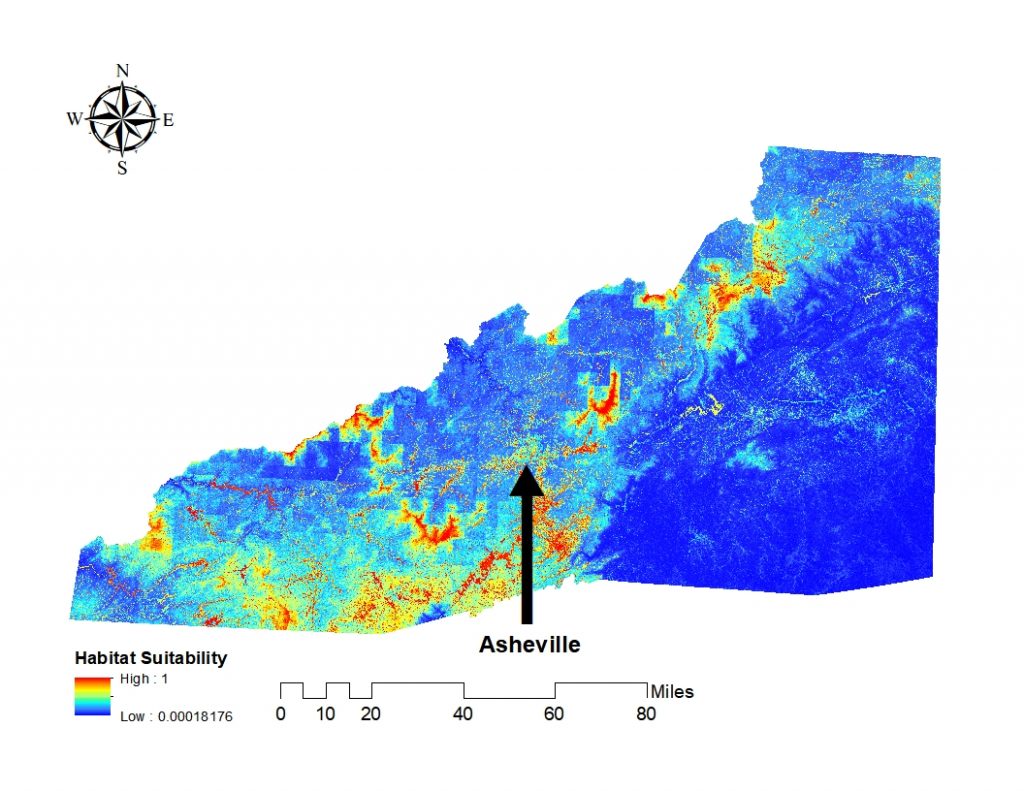 Both the municipalities of Boone and Blowing Rock are highlighted for this area as suitable habitats. Much of that has to do with the amount of open space coupled with dense surrounding forested areas. The Boone Greenway along the South Fork of the New River would be a great place to check out along with any of the parks and walks in Blowing Rock. There are also some good short hikes in between the two towns that would be good to check out like the Rich Mountain Carriage Trails. 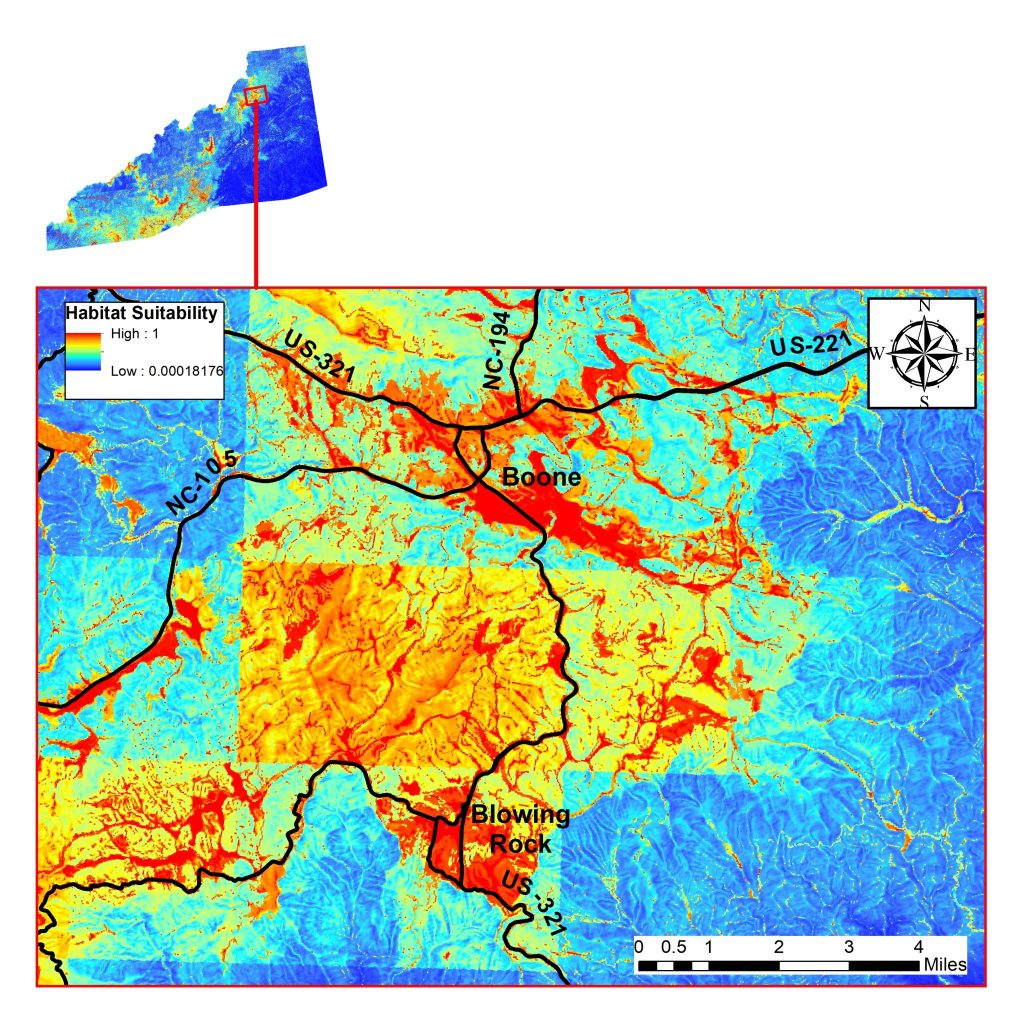 Just North of Boone, there is an area with a few balds as well and they show up as suitable habitat. Check out Potato Hill, Snake Mountain, Rich Mountain, and Elk Knob when flowers are in bloom and you’re bound to find abundant Bumble Bees. 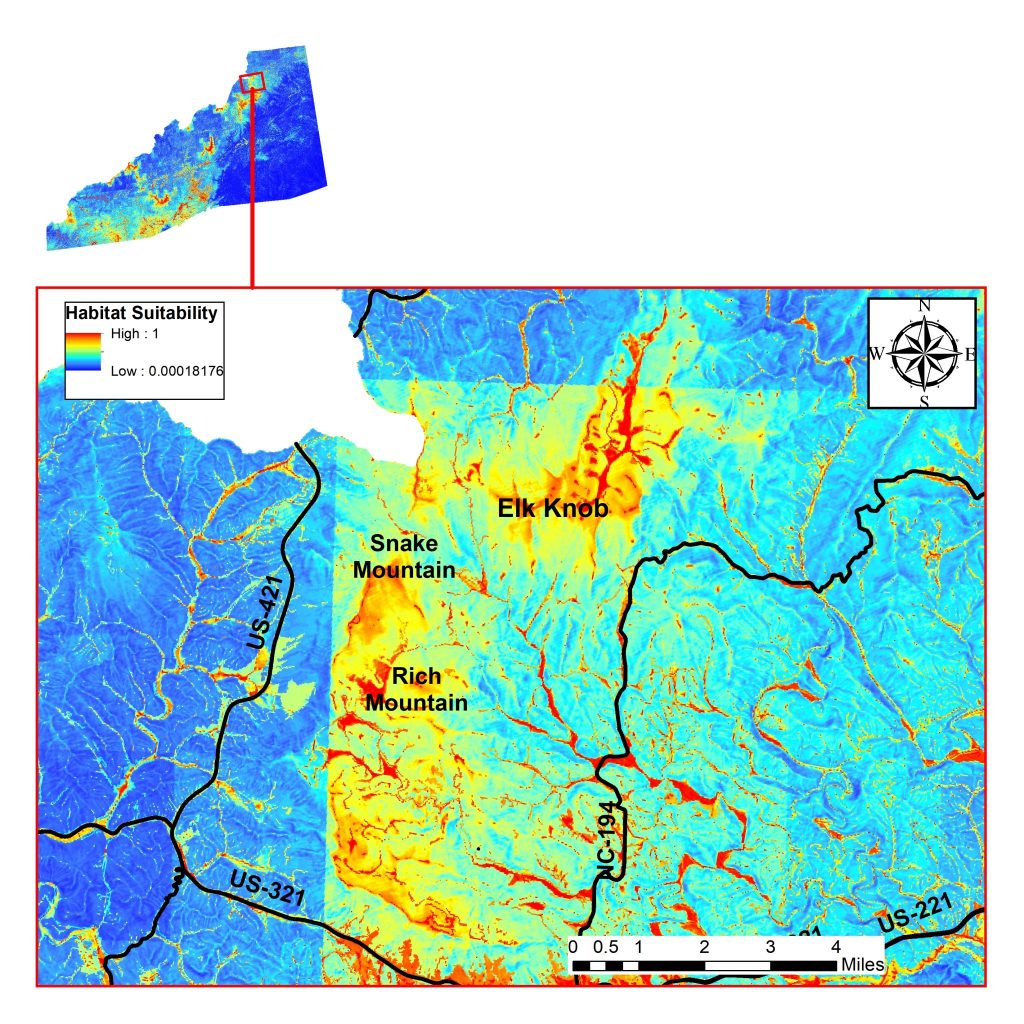 The municipality of Sparta is similar to the Boone area in that it exhibits rural fields and agricultural areas that are surrounded by pretty extensive forest. Sparta lies close to the Blue Ridge Parkway and that helps make it a potential hot spot for Rusty Patched Bumble Bees. Check out the park near Bledsoe Creek and see what’s buzzing around there and if you live near or know anyone that lives near Sparta let them know to search their property and any green spaces they know of. 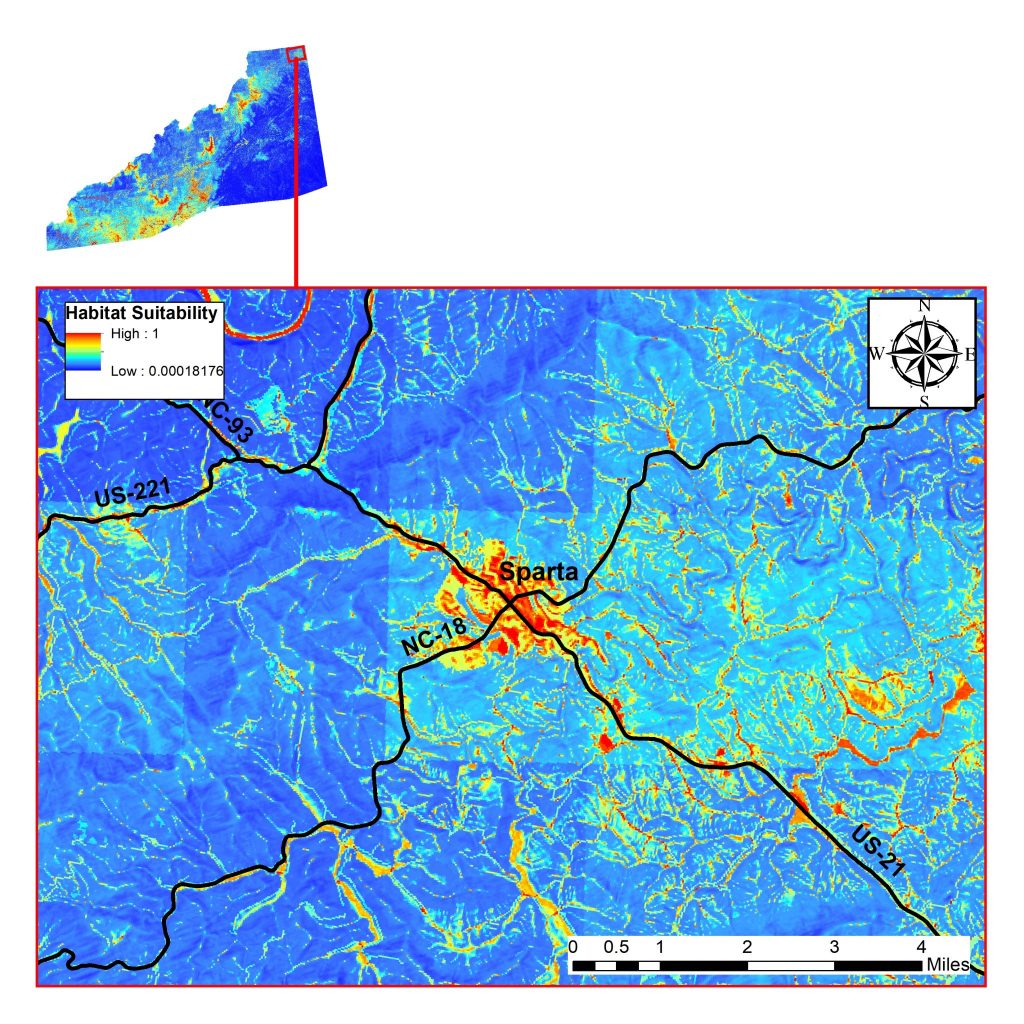 Roan Mountain is well known for the balds to the East of Carver’s Gap and for the Cloudland Trail to the West of Carver’s Gap. These protected areas provide excellent habitat to search with the open areas on the balds providing year round flowers for the bumble bees and the extensive forest nearby providing early spring flowers and ample wintering grounds. 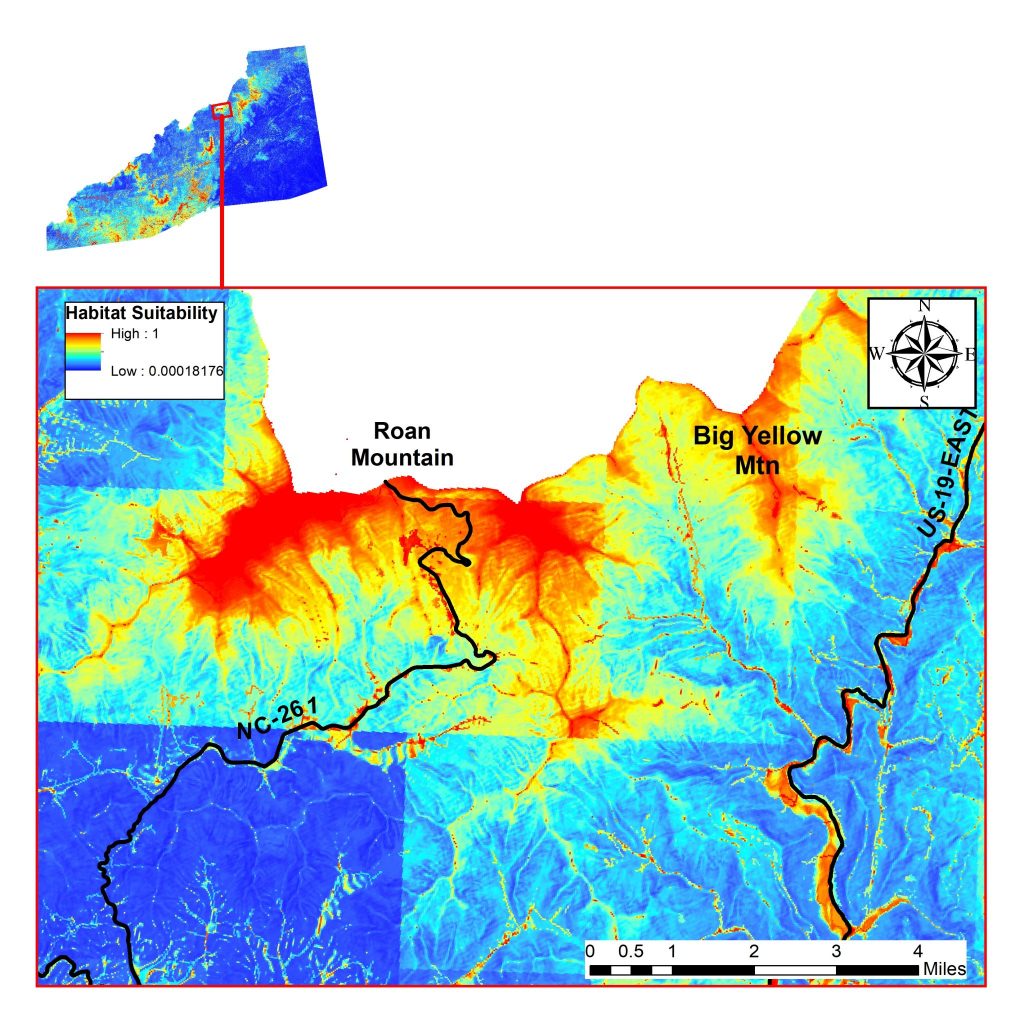 Hit the slopes! But, when they’re not covered in snow… Sugar and Beech Mountains are well known ski towns and that mix of open space and surrounding forest again makes for good bumble bee habitat. Search the parks and greenways near the forest in these areas. Grandfather Mountain is a gem for tourism in the area and its rocky peaks and forested slopes provide the cool weather that bumble bees love. Look for the open spaces within the park, such as peaks, parking lots, and picnic areas to find those flowers that persist throughout the year. 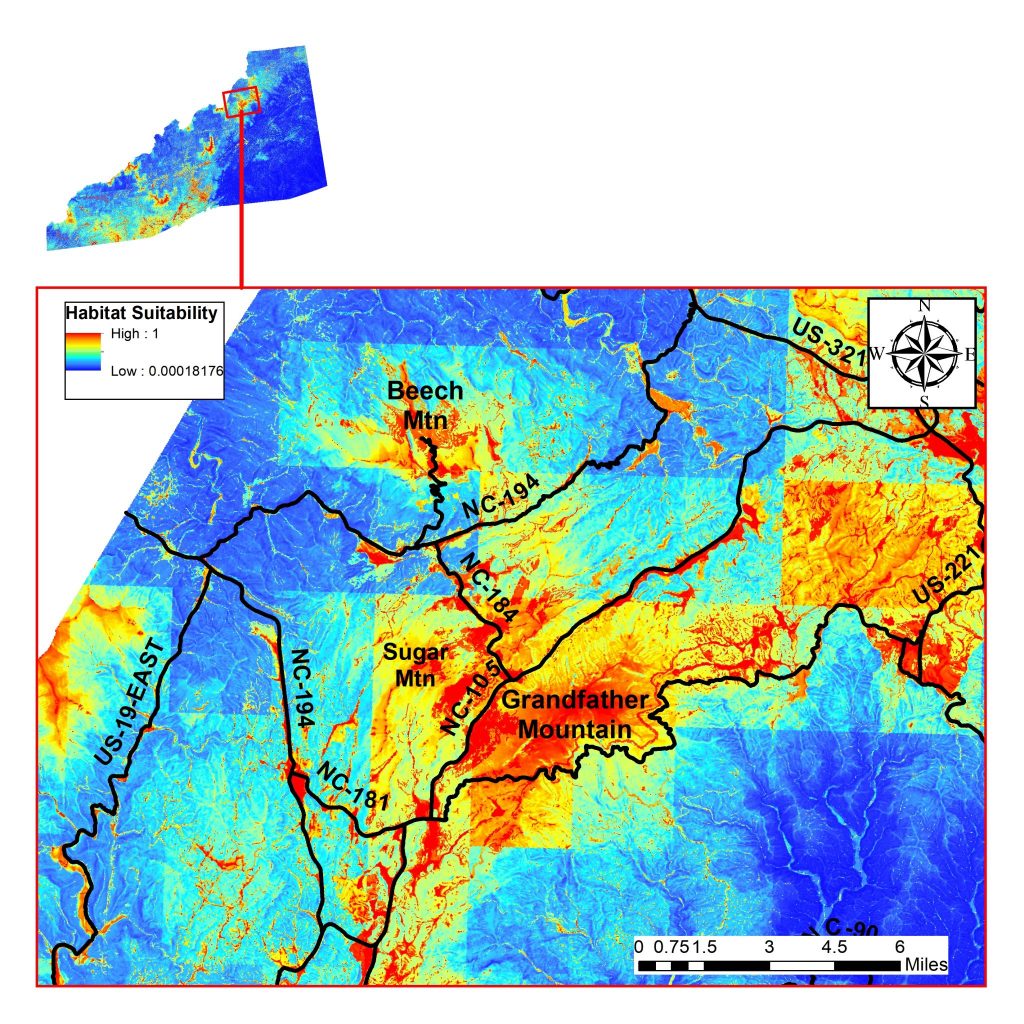 Mount Mitchell harbors all kinds of unique plants, animals, and ecosystems, which makes it a perfect place to search for rare species like the Rusty Patched Bumble Bee. Specifically, the summit of Mount Mitchell has open space around the observation deck and the surrounding trails that harbor wildflowers all year long. Also, the Black Mountain Crest Trail has an opening at the summit of Mt. Craig and a Big Tom Gap Spur Trail that descends to the East at Big Tom Gap exhibits some nice edge habitat as well. 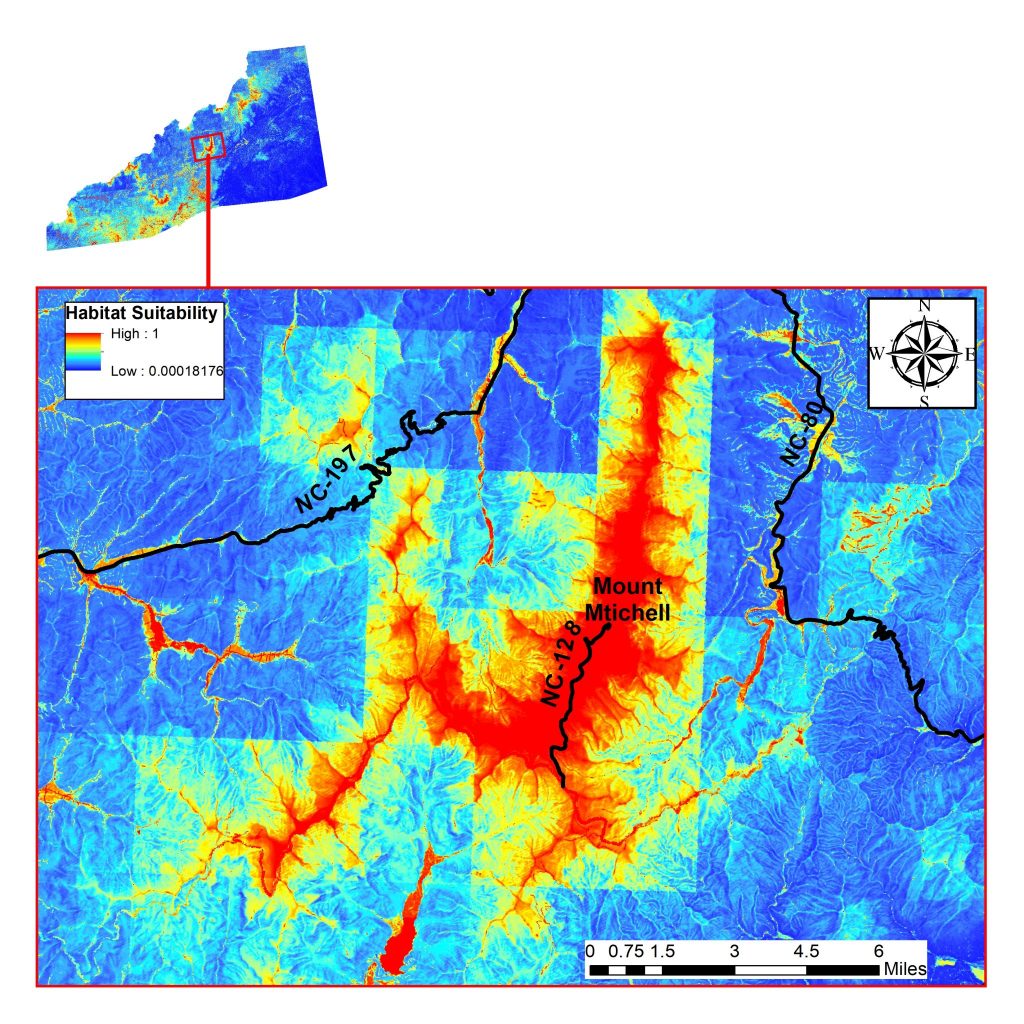 These two municipalities have many greenways and hiking trails within town limits and just outside of town that exhibit great habitat for bumble bees, again because of their close proximity to extensive forests. Walk the paths around these two towns and see what you can find! 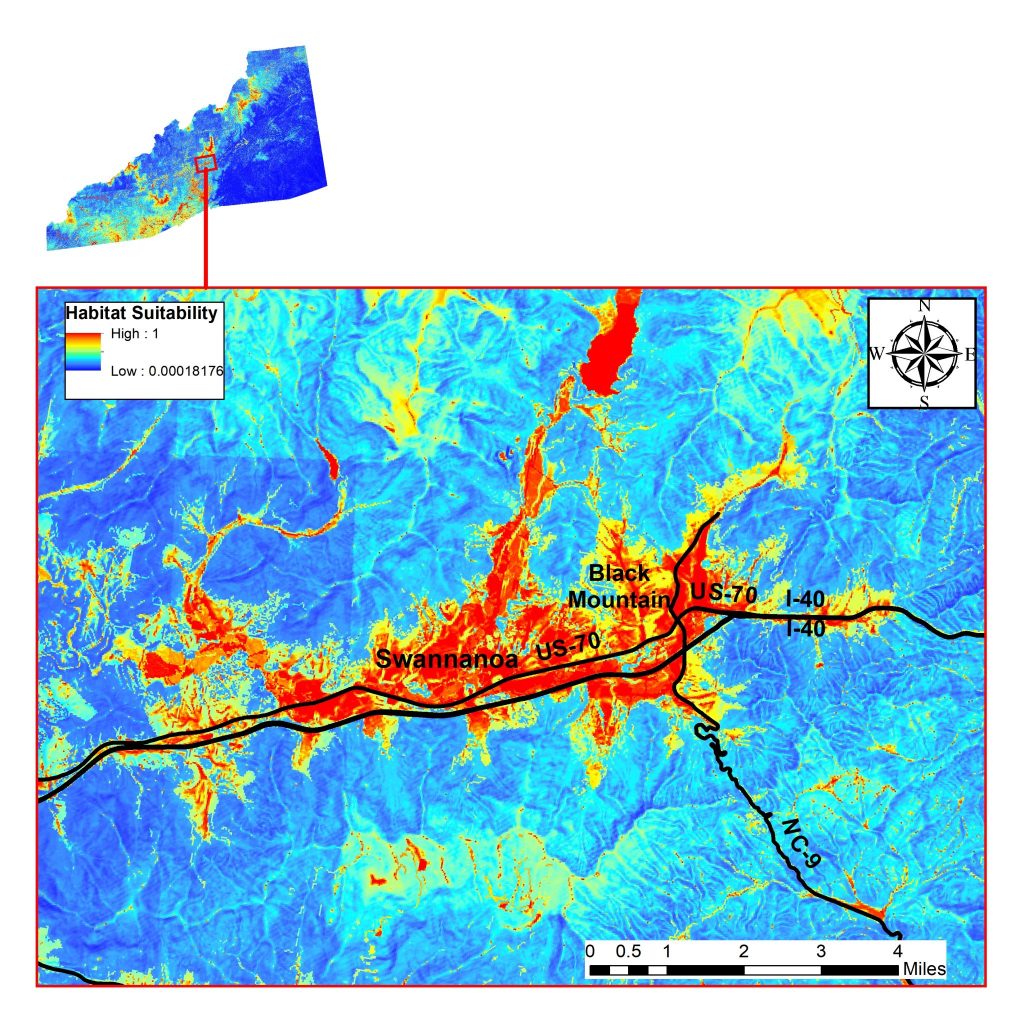 Again, hit those greenways! Brevard is an active town and has many walking and biking paths. Not to mention the Pisgah National Forest that basically spills right in to the town. Search the banks of the French Broad, wildflower gardens, and the trails and I’ll bet you’ll find a good number of bumble bees around this area. 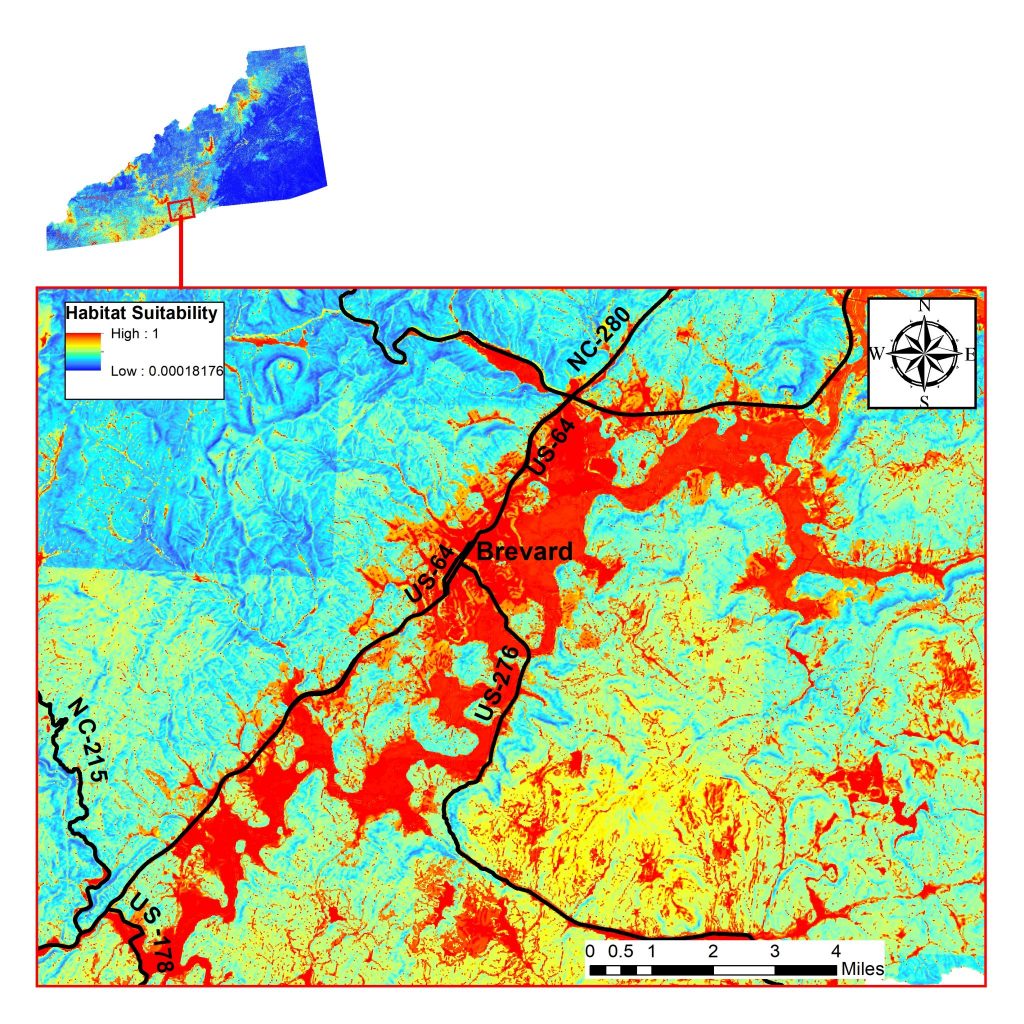 These two wilderness areas provide a large tract of near-pristine ecosystems with towering peaks and open areas surrounded by extensive forests. The trails in Shining Rock and Middle Prong such as Green Knob, Graveyard Fields, Sam Knob, Black Balsam Knob, and Old Butt Knob provide excellent habitat for pollinators and many other species. 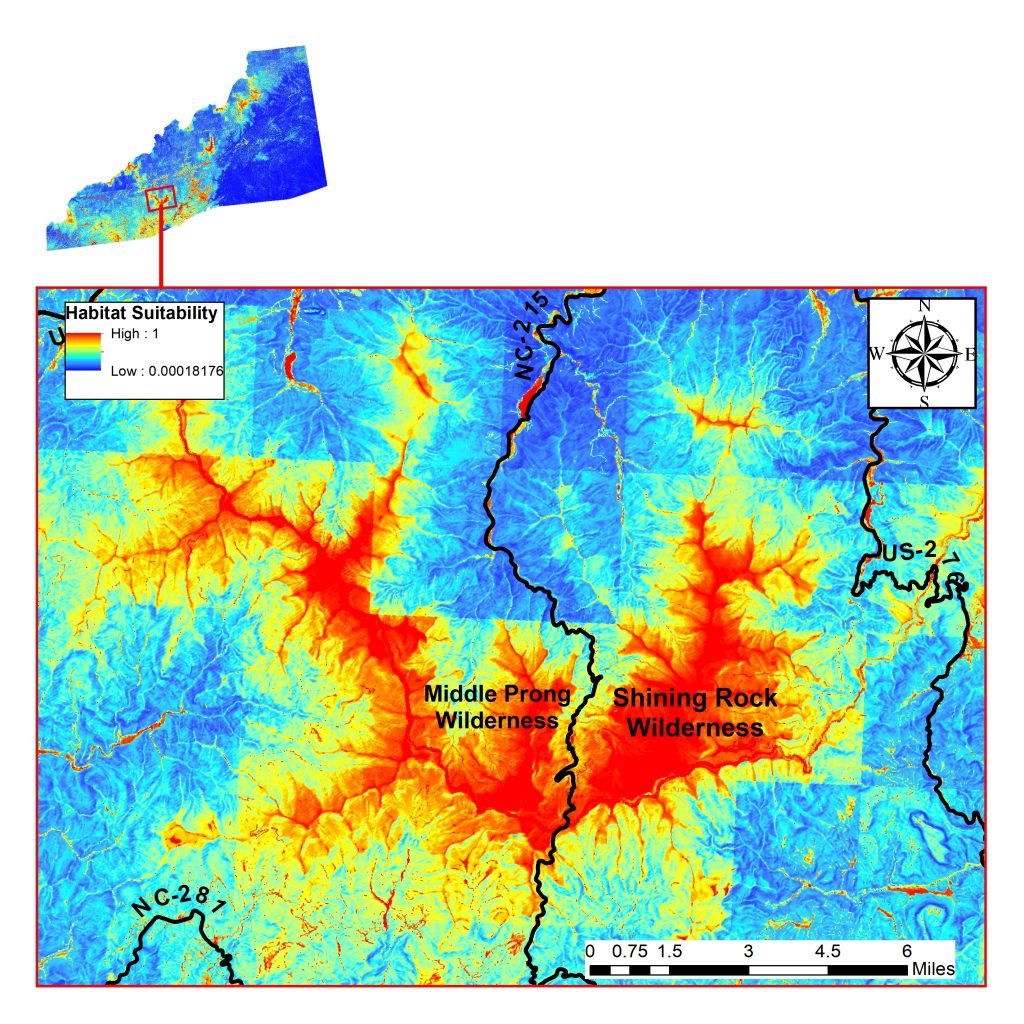 Joyce Kilmer-Slickrock Wilderness is a beloved place by residents and visitors to the area and harbors some of the last remaining old growth forests in the state. The undisturbed nature of this area makes it a good place for rare species to seek refuge. The Unicoi Mountains also harbor an extensive roadless area that provides refuge to rare species there as well. 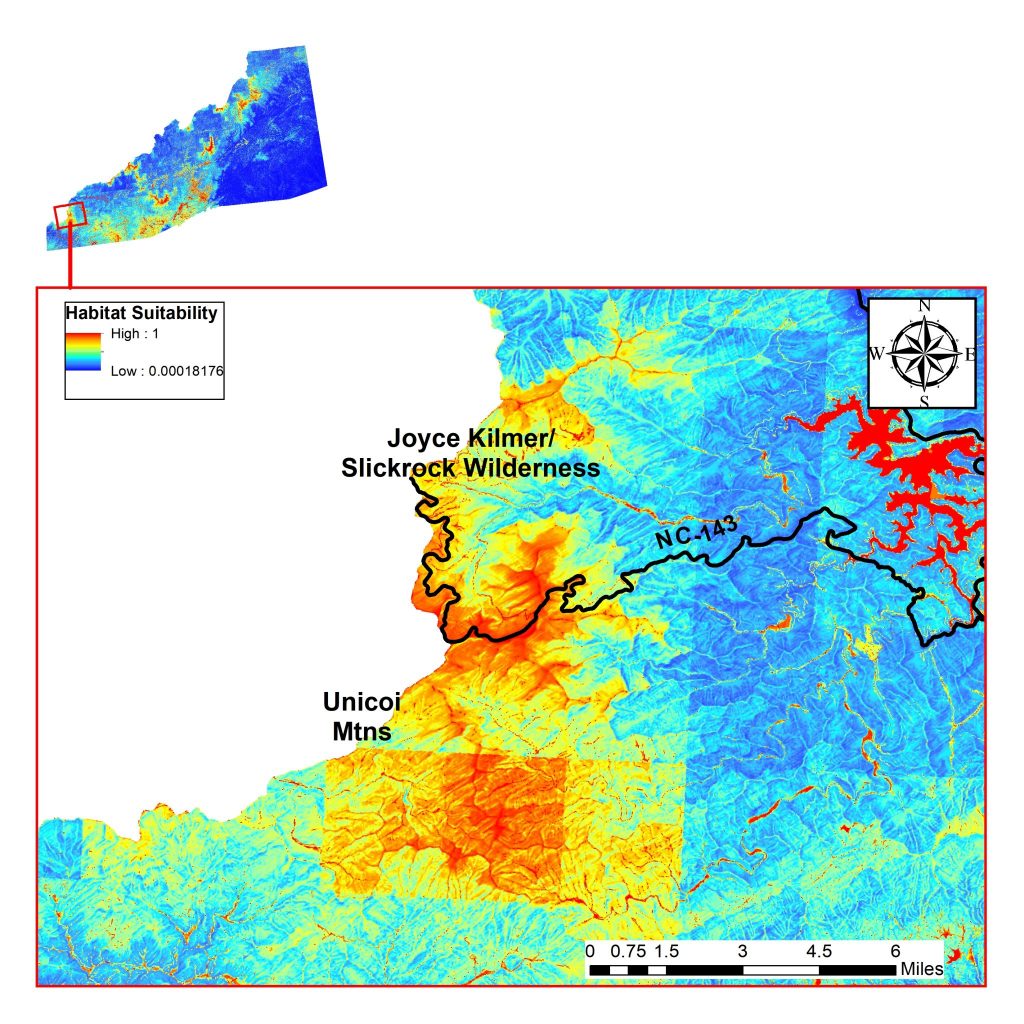 Greenways and parks, greenways and parks. Get out on the paths in these towns and see what you can find. Again, these two municipalities are good candidates due to their proximity to extensive forests. 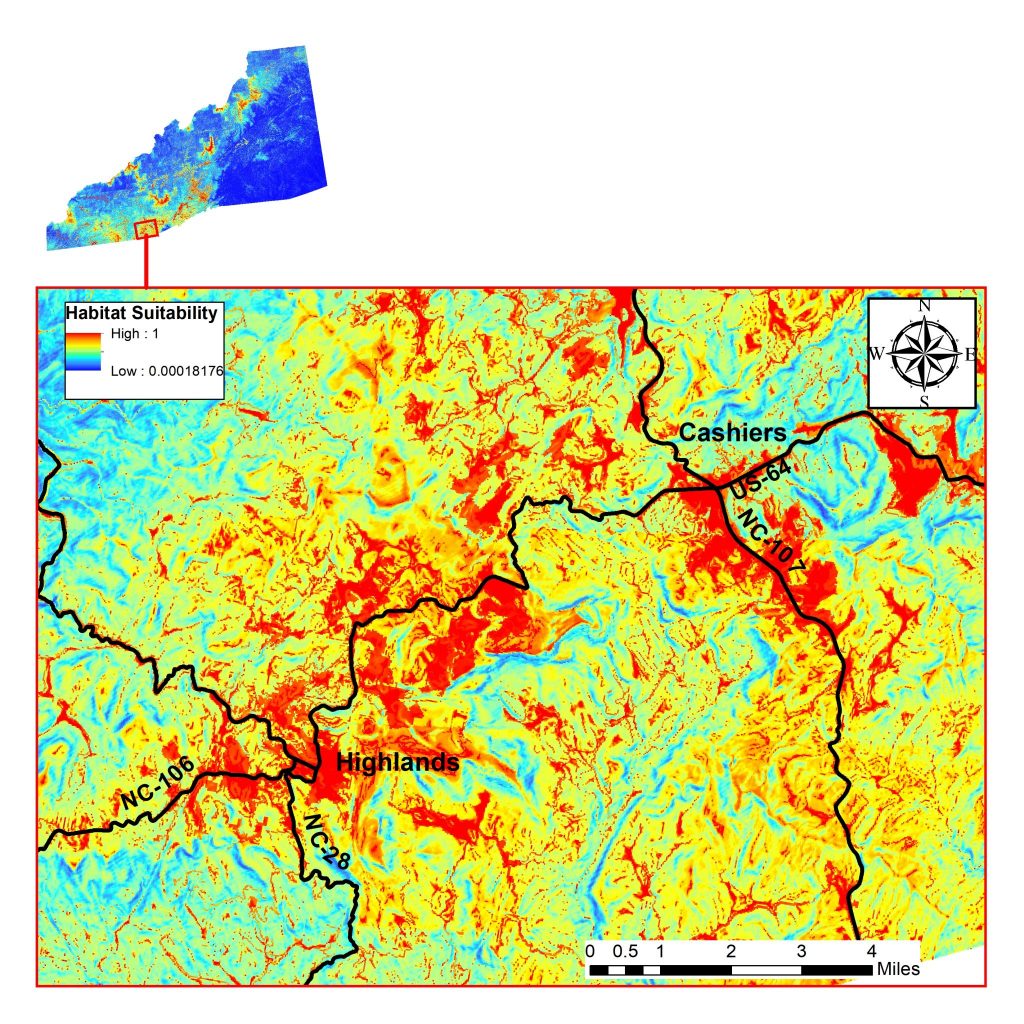 Other Priority Places to Search