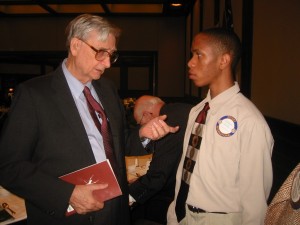 The University of Alabama

Citizens from throughout Alabama will join together for an evening of storytelling and sharing discoveries about Alabama’s natural world to honor Alabama native son and internationally recognized naturalist and biodiversity expert Dr. Edward O. Wilson. The tribute is part Edward O. Wilson Week at The University of Alabama April 21-25.

“Alabama’s Biodiversity-Inspiring A New Century of Discovery” will take place Wednesday, April 23 at 7 p.m. in the Concert Hall of the Moody Music Building on the UA campus (tickets can be purchased HERE ).

“Frog callers, butterfly experts, and naturalists who have discovered plants and animals found no where else but in Alabama, will share their experiences and expertise in this fun-filled and information packed night to honor our good friend and Alabama native son Dr. Edward O. Wilson. Wilson is well known for his passion for promoting and protecting Alabama’s impressive biodiversity and his passion for supporting Alabama’s future scientists. Indeed, he frequently returns to his home state for field work and explorations. Our speakers will include both professional researchers and lay naturalists who will focus on these two passions and how they have given them a greater appreciation of Alabama’s natural environment,” said Pat Byington, of Wild South, a sponsor of the event.

The event is open to the public. Admission is a minimum $10 donation to the Edward O. Wilson Biodiversity Fellowship program at The University of Alabama.

Bill Finch, author of the “Longleaf – As Far as the Eye Can See” and renown naturalist;

And many more, scientists, educators and naturalists from Alabama.

The evening will also feature the presentation of a special gift to Wilson from the children of Alabama.

“Alabama’s Biodiversity – Inspiring A New Century of Discovery,” is presented by: